Hiking the AT can be synonymous with meeting people.  In the southern Appalachian mountains, the local inhabitants often have very specific information about the land, and an unusual way of expressing themselves.  Stopping to talk can become a rewarding adventure!

A month ago, we met a hiker in Georgia who told us that this time of year, the mountains always had a cold northwest wind.  He said the ridges would make one “freeze or fry”.  On the windy side of a ridge, winter reigned.  On the lee side, a hiker’s coat would come off and sweat pop out.

Early today we met a local who described the trail as having a “slope like a horse’s face”.  What a fitting description when the path decides to head straight uphill (or downhill), following the seesaw of a ridge line!

This afternoon, coming down to Allen Gap, we saw a hand-lettered sign in the woods: 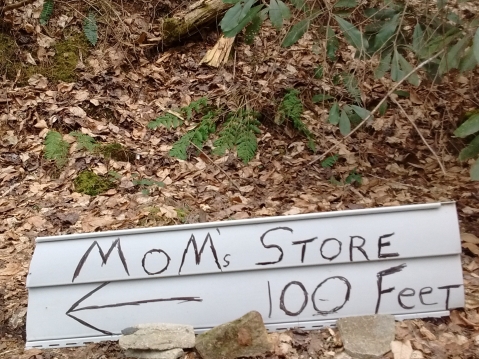 In the promised 100 feet, a neglected looking building appeared, with some boarded up side windows.  A cardboard sign in one front window said, “Open”.  Another window was broken. 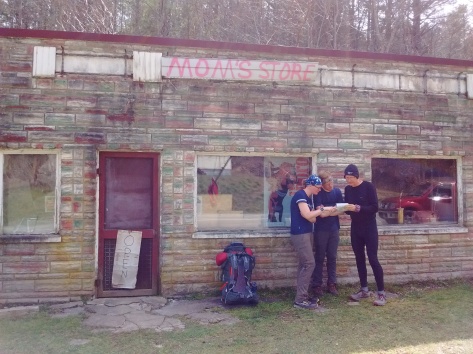 Inside, a counter and various refrigerated cases displaying snacks, drinks (V-8 juice!), and ice cream occupied the front.  The other half of the building was a wonderful jumble of antiques and even older ‘stuff’.

The store owner, Dwayne, had grown up at this store, back when his parents operated it as a gas station.  When he retired, he started the store again out of nostalgia. “Folks look at me and say, ‘You’re not Mom’, and I tell them, no, I’m Mom’s son.”

“This store has existed for the last 60 years.  Even the floor has history,” Dwayne said.  “I was 11 years old, helping my father put in this pine wood floor, when we heard on the radio that JFK had been killed.  I remember all work stopped that day.”

The store has been a source of snacks and refreshment to hikers and travelers for decades.  “My mother met Grandma Gatewood (first woman thru-hiker, in the 1950s) two different times,” Dwayne told me.

However, hikers need to realize that this store is in a truly isolated spot, with no running water or telephone.  If one enters without preconceived notions of a city store, a small trip into local history may be the reward!