The AT has more than its share of mythical figures, inspiring stories, people seeking and finding redemption, peace, direction.  Earl Schaffer, the first AT thru-hiker, laid to rest personal demons from the war.  Grandma Gatewood, age 67, persevered to become a celebrity in the 1950s, after forest rangers told her, “Go home, Grandma.”   Bill Erwin hiked the trail blind, depending upon his own wits and determination as well as his guide dog, Orient.  Stacey Kozel conquered incredible difficulties as she thru-hiked with paralyzed legs.  These are the stories that draw people to the AT, these are the stories that shine as a beacon when people grope through dark times.

However, the real heroes of the AT are a small group of dedicated volunteers, spread thinly across 2,196 miles of mountains.  Trail maintenance crews make possible the dreams of thousands of hikers.  Without the service of these incredible people, the trail would quickly cease to exist.  For the love of the trail, these folks keep our path safer, more reliable, and navigable.

Today we were hiking through the trees, following a route of rocks and roots and mud as usual.  Suddenly the sound of metal striking metal rang through the woods.  We rounded a couple bends in the path and came upon three men laboring over a series of logs crossing a long morass of mud.

Peter Rodrick, head of the Maine Appalachian Trail Club (MATC), stopped to chat as we admired their work.  “I’ve been wanting to get a boardwalk over this section for several years,” he gloated.  “It’s good to see it happening!”

“Those logs look pretty heavy!  How did you get them in here?” I asked.

“Well, we had a bunch of volunteers this morning, trucked the logs up to the nearest road, and they all carried them in.  Then the three of us, Shamus LaPerriere, Scott Quint, and myself, have been working the rest of the day, laying out and securing this walkway.  You know, the MATC is going more and more towards bridging these swampy places with rocks.  But the boardwalks are a good deal faster to build.  If made from cedar, they’ll last 20 years.  I reckon the rocks might last 100 years though.”

We watched, fascinated, as Shamus and Scott used brace and bit to drill holes, then secured the last log with a couple of metal spikes, tamping them in with the back of an ax.  “You two can be the first hikers to walk this,” they invited us.

It seemed to me that such a moment needed more than just two grubby hikers prosaically walking over the mud.  I stepped up on the first log.  “Ta-ta-ta!  Ta-ra-ta-ta Ta-ta-ta!” I played on an imaginary trumpet.  Then, spreading my arms for balance, I crossed, enjoying the level boards, dry feet, and ease of passage.  “Wow, this is wonderful!  Thank you, thank you!  You are awesome!” 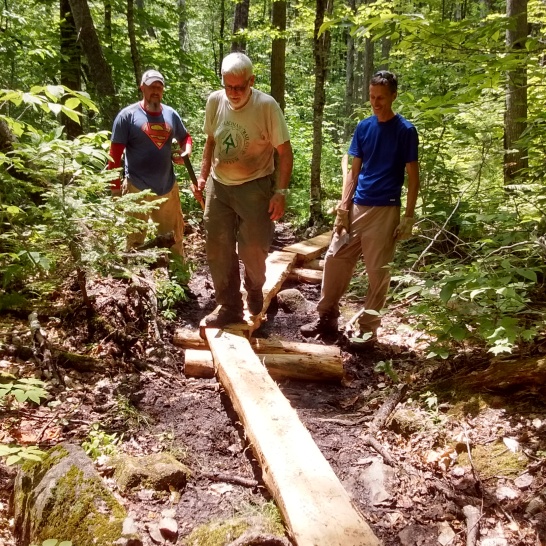 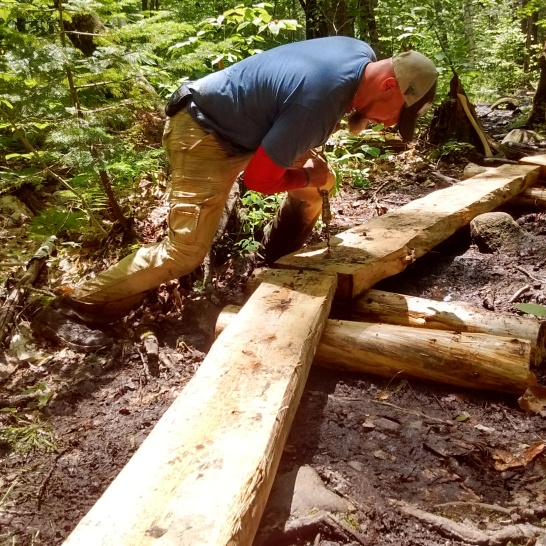 Today as we were hiking, once again we heard the sound of metal striking upon metal.  There were five in the trail crew, bridging a long mucky stretch of trail, this time using large stones.  Once again we stopped to proffer our thanks and get educated on the methods of trail building.

“How do you move such huge rocks?” Jay asked as he eyed the boulders, some easily the size of a Galapagos giant tortoise.  “They must weigh 500 pounds or so!”

“We mostly roll them, using these steel pry bars,” the crew leader answered.  “Yesterday we mined 72 stones from the forest.  It was a good day!”

“I guess you always try to get the rocks from the uphill side of trail then,” Jay laughed.

“We met a trail crew yesterday.  The leader told us that these walkways made with stones could last 100 years,” I remarked.

“Well, I haven’t been around long enough to know if that is true,” the crew leader smiled.  “But hopefully they will last a long time.  It’s slow going, getting the rocks put in.”

“I think it is amazing, the way you lay them so close together, and all level!  It makes it really easy to walk upon.  Thank you so much!” I told him.

“You can be the first hikers to walk these 15 stones that are already laid,” he invited us.

We took their picture, thanked them again, and continued, marveling at the dedication and commitment of these volunteers.  Yes, these are the real heroes on the AT. 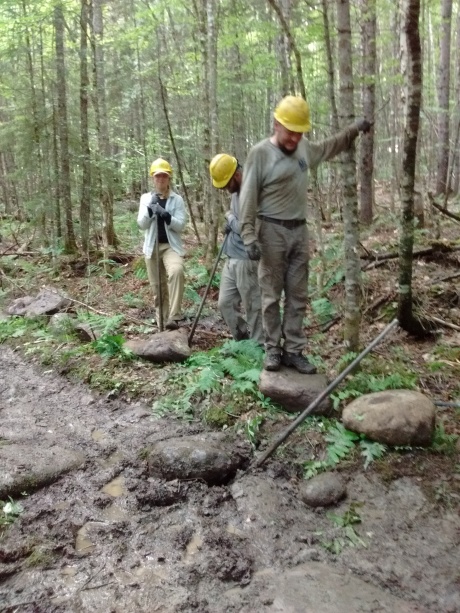 2 thoughts on “The Real Heroes”