For many sections of the Appalachian Trail, the path climbs to a ridge top, then stays high and follows that ridge for a good ways.  Not so in southern New York state.  Each day is a series of abrupt ups and downs, with brief moments on top sandwiched between steep ascents and descents.  “It’s kind of like walking across a Ruffles potato chip,” Jay remarked our second day.

That kind of rough terrain lends itself to many picturesque names.  Agony Grind, a vertical two tenths of a mile rock scramble, leads to The Lemon Squeezer, an ever narrowing cleft leading downwards.  We encountered the Eastern Pinnacles, a series of skinny ups and downs, and Wildcat Rocks, a set of huge boulders obtruding from a tree-covered mountainside.  As I labored over the landscape, I felt there should be more names to describe what hikers have to go through to get across this state.  The following names will not be found on any map, except in my own imagination.

Pointy Rock Minefield – a section of trail covered in football-sized pointy rocks, jumbled together, with scarcely any dirt between.  To walk upon this, one must choose footsteps carefully, balancing upon knife edges and points of rock.

Ankle Grabber – see description above.  Then add slightly larger rocks, which tend to let feet slip into cracks and grab ankles with ferocious glee.  Both Pointy Rock Minefield and Ankle Grabber were seen quite often during our hike across New York.

Knee Knocker Notch – Once achieving a ridge top, sometimes the trail would follow the ridge for maybe 25 yards before diving down through a notch.  Standing on top, looking down the perpendicular rocks, my knees would begin to knock together in fear.  It always looked higher from above!  And often, when descending the short rocky cliff, I would end up knocking my knee upon a protruding lump of stone.  Ouch!

The Cheese Grater – This was so named by Jay, after I tried to slow my precipitous slide down the side of a huge boulder, and scraped the inside of my elbow.  The ‘raw meat’ look of my skin and the blood spots left on the granite were enough to earn that place its own name.

Endless Stone Sidewalks – The spines of the ridge tops were often exposed as smooth paths of rock.  These went up, down, left, right, and I half expected to see a loop-de-loop sometimes.  Though the smooth paths were a welcome change from Pointy Rock Minefields, their steep angles still took their toll from our leg muscles. 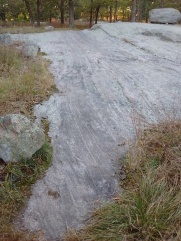 Toehold Teaser – Sometimes, when presented with a Pointy Rock Minefield, there would be a small cliff face running beside it.  One could choose to walk above the minefield, sticking toes into ever-narrowing cracks, hoping to stay balanced until the trail turned back to dirt below.

Stair Step Swing – Often trail builders put stone steps down the mountainside to help one get off a ridge.  This was wonderful, but sometimes the stones were made for giant legs.  Boulders on either side of the steps invited me to use them as banisters and just swing my aching legs through the air, skipping the stairs entirely!

Progress through the state of New York was slow, with times of extreme physical exertion.  But there were also times of fun and even playful times.  A state definitely worth hiking!