Happy birdsong woke us at daybreak, and we were on the trail by 6:30 a.m., hiking out of Mattox Creek Canyon in the cool of the morning. We passed a great deal of poodle dog bush in bloom. This plant, endemic to southern California, flourishes for a few years after a forest fire. Pretty as it is, we were careful to avoid touching it, as it can cause a serious rash. 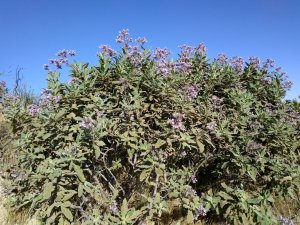 We consumed the last of our food at breakfast, eaten in early sunshine at the top of the canyon. Two tablespoons of peanut butter and a handful of mixed raisins, nuts, and pumpkin seeds would have to last us three and a half miles until we reached a KOA at Soledad Canyon Road.

The trail circled up and over and around dry ridges until suddenly diving over the edge to descend into Soledad Canyon. At the KOA, we bought more breakfast, and lunch to go, while we watched a crowd of Boy Scouts and Girl Scouts assemble for morning instructions, then mingle. About a dozen more thru-hikers arrived as we ate our second breakfast, until the porch of the store was crowded with packs.

Nine miles later, we hiked into Vasquez Rocks Natural Area Park. This 932 acre park has a rare beauty. The rocks are mostly made of coarse-grained conglomerate and breccia sediments. Their fantastical shapes were formed by active fault uplift combined with rapid erosion of the San Gabriel Mountains. Many films have been set here, including several episodes of Star Trek.

Jay and I enjoyed our walk through this whimsical land. A few pictures might show it better than my words. 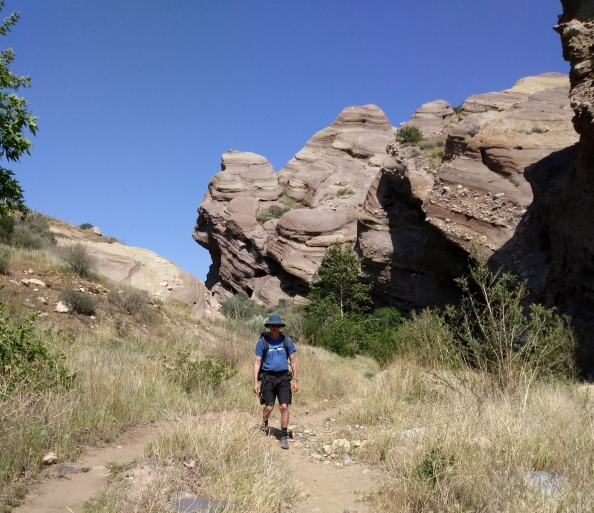 Jay stands beside a wall of layered stone.

A mile and a half after leaving this fanciful landscape, Jay and I walked into the small town of Agua Dulce. This town has a wonderful grocery store, but is too small to support a hotel.

For the last 20+ years, lodging for hikers has been provided by the Saufley family, on their land, nicknamed Hiker Heaven. There is a suggested donation of $20 per person and a limit of two nights. This money doesn’t begin to cover the ‘luxuries’ provided for hikers!

The Saufleys are incredibly organized, with showers, shelves of loaner clothes, several rented porta potties, chairs for relaxing, a kitchen open to hiker use, and a spacious yard for tenting.

Jay and I set up our tent, took showers, then caught the shuttle back to town to get dinner at the local Mexican restaurant, Casa Bonita. What a treat, to be clean, eat delicious food, then toddle back to our tent for the night!

The moon shone over twenty-six tents that night.