This morning, Jay faced me as we packed up.  “What do you want to do?”  he asked.

I knew he was referring to yesterday’s panic on the mountain.  I knew I didn’t have to continue.  But if I stopped, I would give up the dream of this grand adventure.  Somehow, during the night, my decision had been made.  “I want to keep hiking.”  My voice sounded strong and sure.  “I might get scared again.”  My voice began to waver.  “But I think I can do this.  I really appreciate all your help yesterday.  If I keep hiking, maybe eventually I can conquer this fear!”

The trail led over Mt. Jefferson, past Mt. Clay, and up Mt. Washington, tallest mountain on the northern half of the Appalachian Trail.  I was delighted to see that for many portions of the trail today, someone had made an effort to change tumbled rocks into a path.  Numerous rocks had been moved, turned so the flat side was facing up, making steps and smooth tread.

Last night a thunderstorm had come through, and today the rocks were a bit wet, as well as the air around us.  Fog swirled, constantly playing peek-a-boo with sun and mountain peaks.  It cheered me, to see the playfulness of the weather!

As we hiked this morning, we met two hikers coming from the Madison Spring Hut.  “Were you outside during the storm last night?” one asked me.

‘Outside?’ I thought.  ‘Who would be silly enough to be outside in the night during a thunderstorm on a mountain?’

The hiker waved impatiently.  “That’s what I meant.  Not in the Hut.  Outside.”

“Did the thunderstorm keep y’all up?” I asked.

“Yes, what a show!  We watched the lightning crackle over the mountain!  It was great … at least from the inside of a building.”  The man grinned with enthusiasm.

“I must admit, I watched the lightning from the inside of my eyelids,” I laughed.  “That was show enough for me!”

Later in the day, as we were climbing Mt. Washington, we met a group of young people shepherded by one adult.  Intrigued, I asked one of the teens, “What group is this?”

‘Wow!’ I thought.  ‘That is cool, a school that takes their students out hiking!  I wonder what academy it is?’

When the chaperone approached, I asked, “What religious affiliation are you all?”  The man looked confused.  I explained, “The student ahead said you were a Christian academy.”

The man laughed.  “Oh, he’s always joking.  We’re just a group of friends out hiking for the day.”

Just then the boy called back, “Come on ‘Father Paul’.  Don’t get too far behind us!”

I doubled over in laughter as the man passed me, still talking to the boy.  What fun!

This morning we saw Sasha and Dragonfly after several days of trailing behind them.  As we greeted them, Sasha informed us, “Dragonfly has been renamed to Firefly!”

“Well, when a hiker comes dragging into Lake of the Clouds Hut after climbing Mt Washington in the dark, we figure she’s really a firefly in disguise!”

Lunch time near Ethan Pond turns into a siesta.  It feels so good to just sit and rest, soaking in the warm sunshine!  As we finally marshal our forces to leave, I notice a spider spinning a web between my legs!  Jay laughs.  “You know you’ve had a long lunch when a spider manages to attach a web to your knees!”

There is actually a section of flat trail in the White Mountains!  Four miles of lovely trail lie between Ethan Pond and the approach to Zealand Falls Hut!  Even better, there are blueberries on part of it!  I’m in heaven as we stroll along the flat path, picking handfuls of blueberries!

We’ve met hordes of hikers today, and as the day comes to a close, more hikers appear!  We had been planning to camp at Garfield Pond, as we were sure the Garfield Ridge Shelter was full to bursting.  But approaching the pond, we could see a tent city springing up.  “Let’s keep looking,”  Jay suggested.  “There’s bound to be a flat spot somewhere before the next mountain.”

We hiked on, racing the coming dusk.  Jay pulled ahead, disappearing between the trees.  Suddenly he reappeared on the trail.  “I found a place,” he told me.  We followed a faint deer track a few yards until the trees opened in a perfect circle, flat and not too rocky.  ‘Oh thank goodness,’ I thought.  ‘But where shall we get water?’

“Do you think you could get enough water from the little puddle we passed a few minutes ago?” Jay asked.

I walked back through the deepening twilight and looked at the small pool.  Perhaps a gallon of water, with a sprinkling of frog eggs on one side, came from a slow seep on the side of the trail.  I dipped up a liter and looked at it.  Wow, clear, cold water!  We only needed three liters.  There would still be enough for the frog eggs until the seep replenished.  A perfect place for a quiet evening!

The trail undulates up and down between Mt. Lafayette, Mt. Lincoln, Little Haystack, and Liberty Mountain.  Franconia Ridge is so picturesque, it’s hard to know where to point a camera!  The ridge slopes steeply on each side, but the trail tread invites feet to walk safely, especially today, with bright sun shining!  “It reminds me of the Great Wall of China,” Jay remarks.  I look at the wall of the ridge, and find myself transported to China.  What a treat! 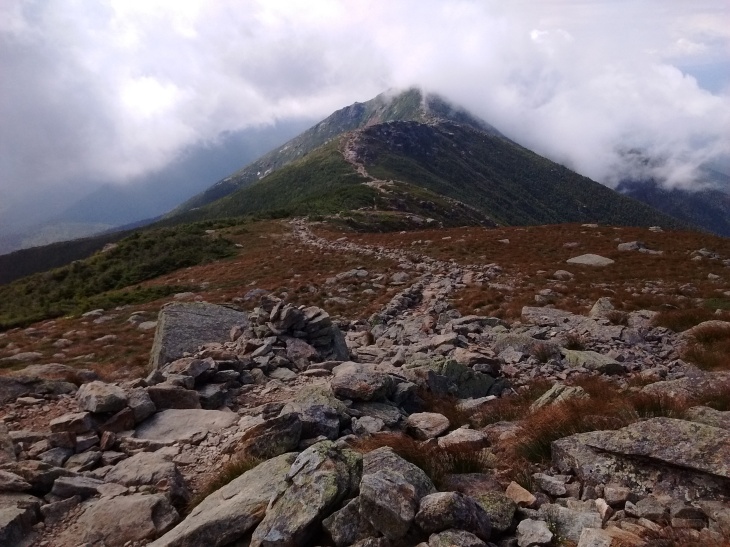 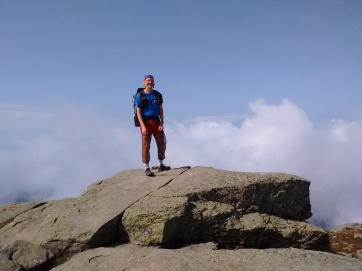 The fun thing about a day of rain is being able to decide, “Hey, we can quit walking anytime!”  At 3:00 p.m., as the rain continued falling, we stopped near Beaver Brook in the Kinsman Notch, and pitched our tent.  What a treat, to snuggle down into dry sleeping bag while the air outside is filled with water!

Mt. Moosilauke is considered the southern edge of the White Mountains.  We climbed from Kinsman Notch to the top of the mountain this morning.  The first 1.5 miles is notoriously steep.  It took us 2 hours!  But the climb was always in the trees, and wood blocks made easy steps up a few of the steep sections!  After that, the gradient gentled slightly, turning the trail to rocks, but not cliffs. 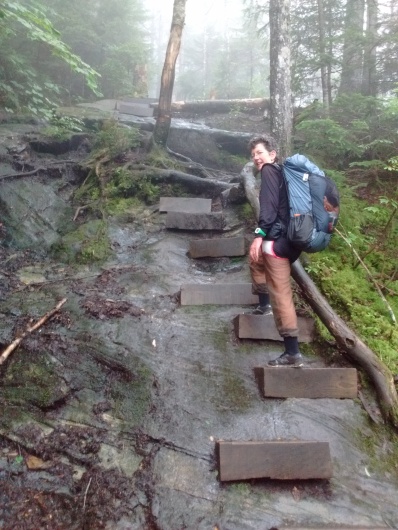 We marked the end of the White Mountains by staying at the Hiker Welcome Hostel.  They took us to a burger joint that served grass-fed beef, had live music, and a campfire!  What a way to celebrate some of the hardest miles I’ve ever hiked!