Whenever the trail comes off a ridgetop in Washington, I know we will be hiking past lakes and crossing streams. Some of the streams are tiny, merely requiring a hop and a skip. Others have worn deep gullies through the trail, and sturdy bridges facilitate our forward progress. Well placed boulders have allowed us to cross some creeks dry shod. But two streams were too big to hop, with no man-made route to help. On those, I sighed and waded in, preferring several hours of wet, squishy shoes to the alternative of stubbing bare toes on slick underwater rocks and possibly falling full length into the water.

Bumping River, named for the habit of tumbling and grinding huge boulders down its length during spring snow melts, loomed large in my thoughts. A hiker named Relish had posted the note, “Had to do some hopping worthy of a billy goat.” The nimbleness of a goat is far beyond my capabilities. I’ve been known to trip on smooth surfaces and take a dive into the ground. As we approached the river that morning, I gloomily predicted another day of wet, soggy shoes. I just hoped the current of a full-fledged river wouldn’t knock me off my feet.

The path forded Bumping River in a wide, shallow swath. I eyed two deeper spots, wondering about the force of the current. Then I noticed a faint trail leading upstream to a large log crossing a deep, narrow bit of rushing water. Hmmm, if it worked, I would have dry feet! If I fell, I would be a lot worse off than if I had waded the ford. I looked carefully, noting the width of the log and the number of footprints across. “I’ll go slow and steady,” I promised myself. A few moments of concentrated work brought me to the other side of the river! 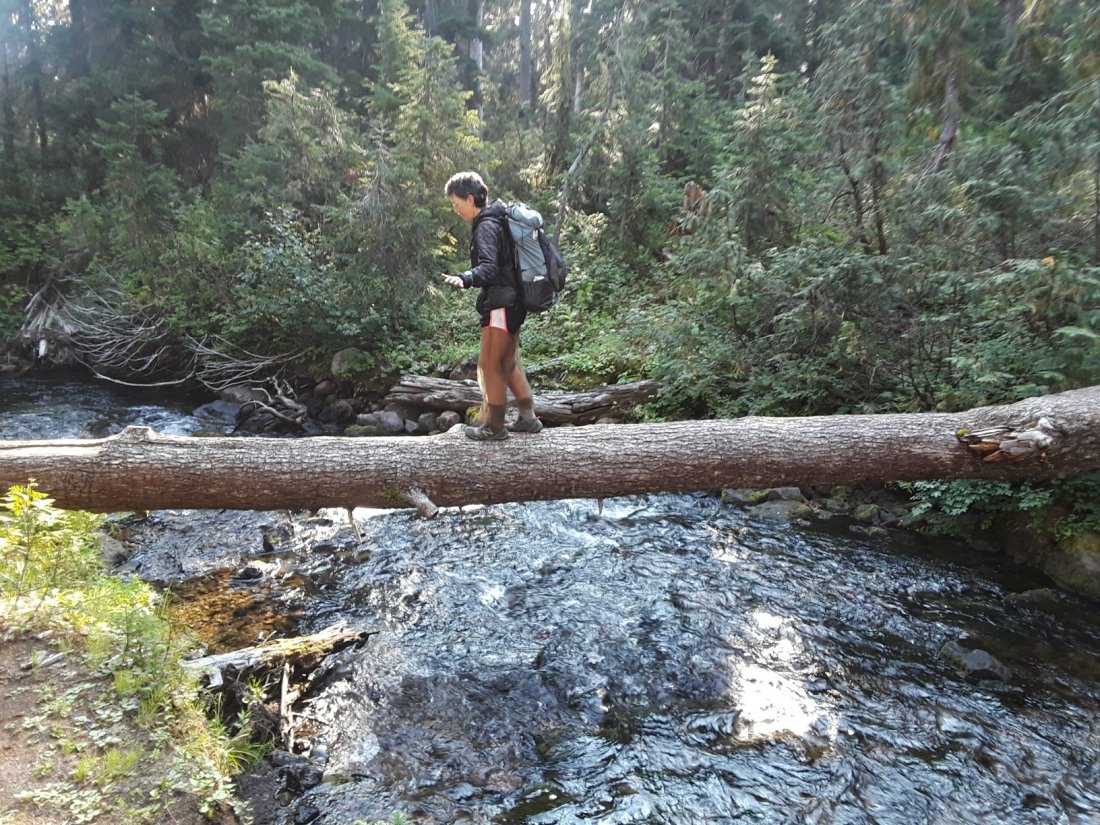 More miles brought us to yet another small creek. Empty water bottles directed my interest to finding a deep pool or a small spout of water. Sure enough, a small waterfall under a log offered the perfect place to fill bottles. 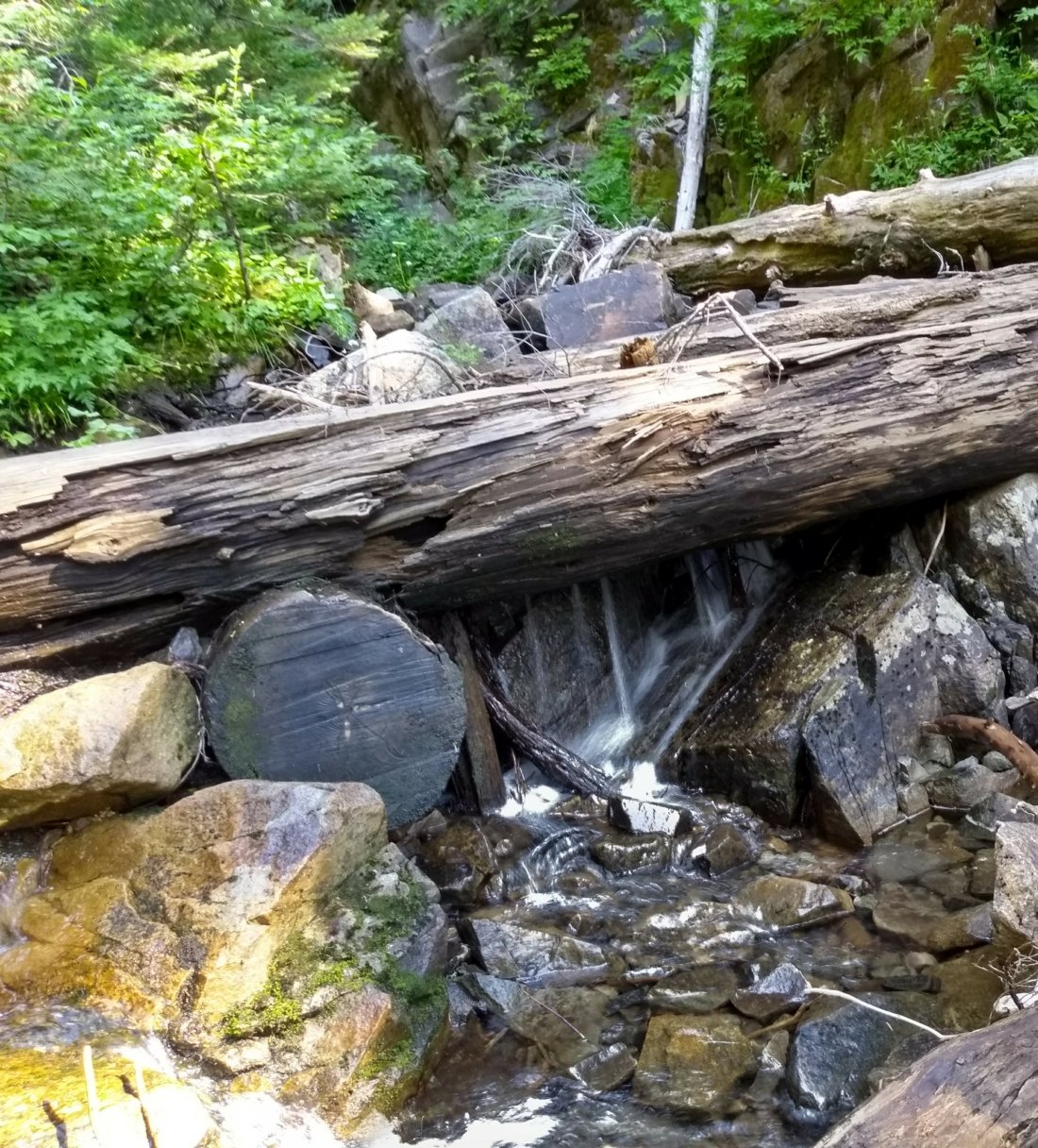 I balanced on two rocks, bending at the hips and stretching my arm, holding the open bottle. Success! Still bent in half, I looked up, thinking to set the water bottle on top of a boulder. Suddenly, I was eyeball to eyeball with a very large frog! He didn’t move, even when I stood up and took his picture. 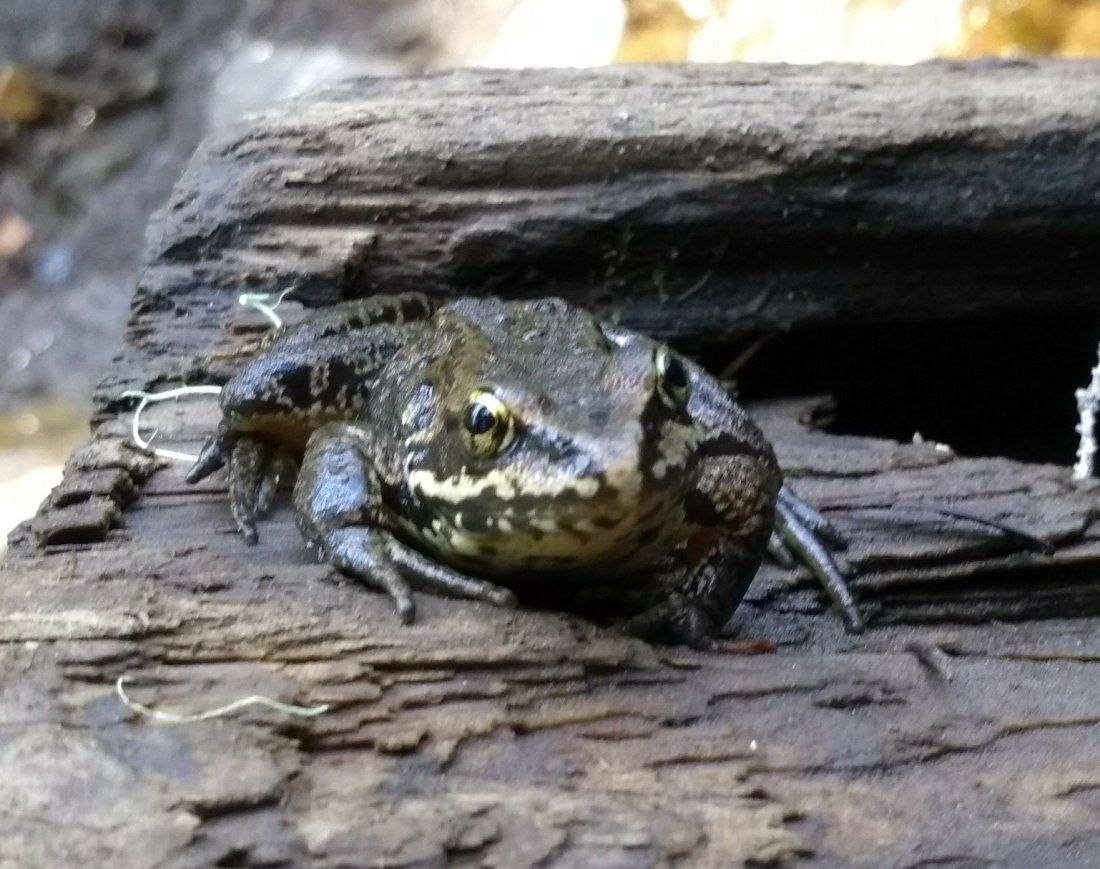 “Maybe he wanted a kiss,” Jay suggested when I later told of my encounter.

“That’s okay,” I responded. “I’ve already got a prince. Two princes would just be complicated!”

We met many hikers during these five days, and saw lots of flowers! 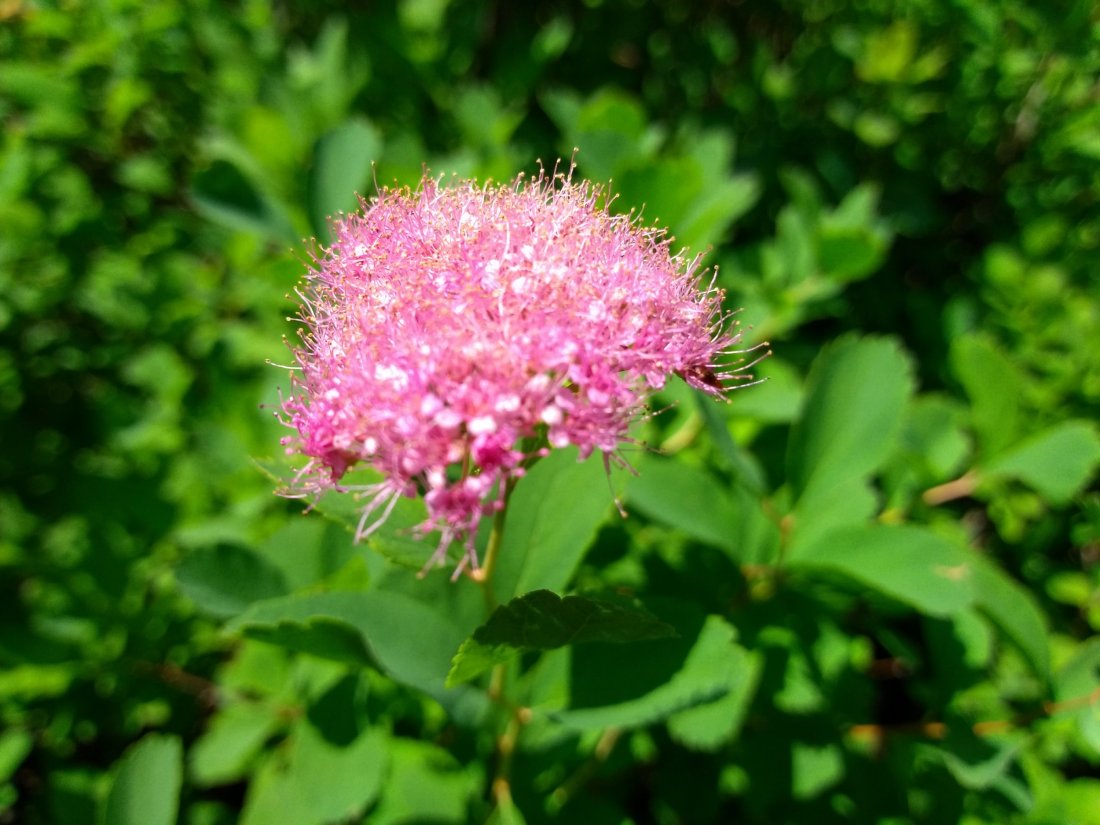 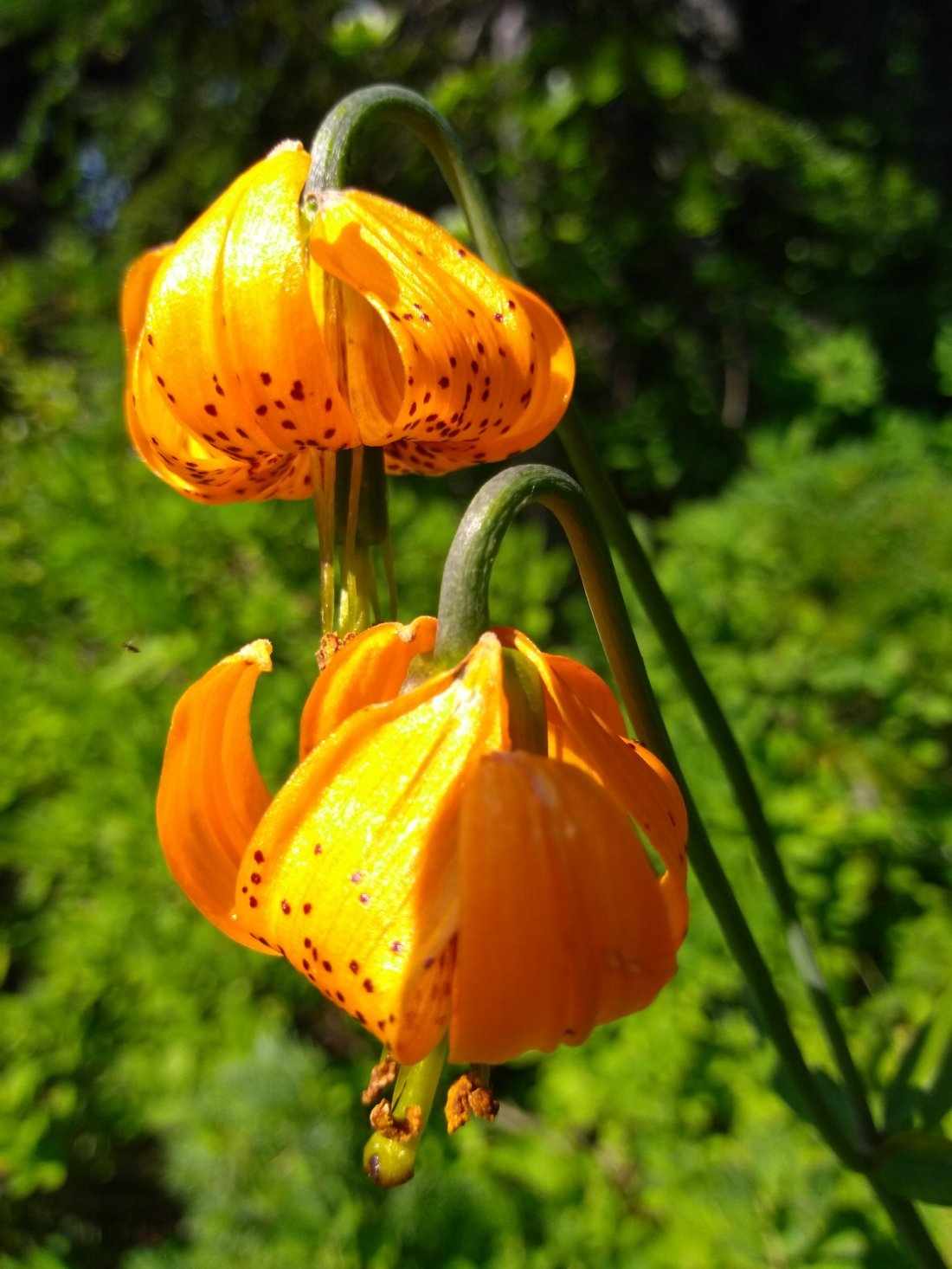 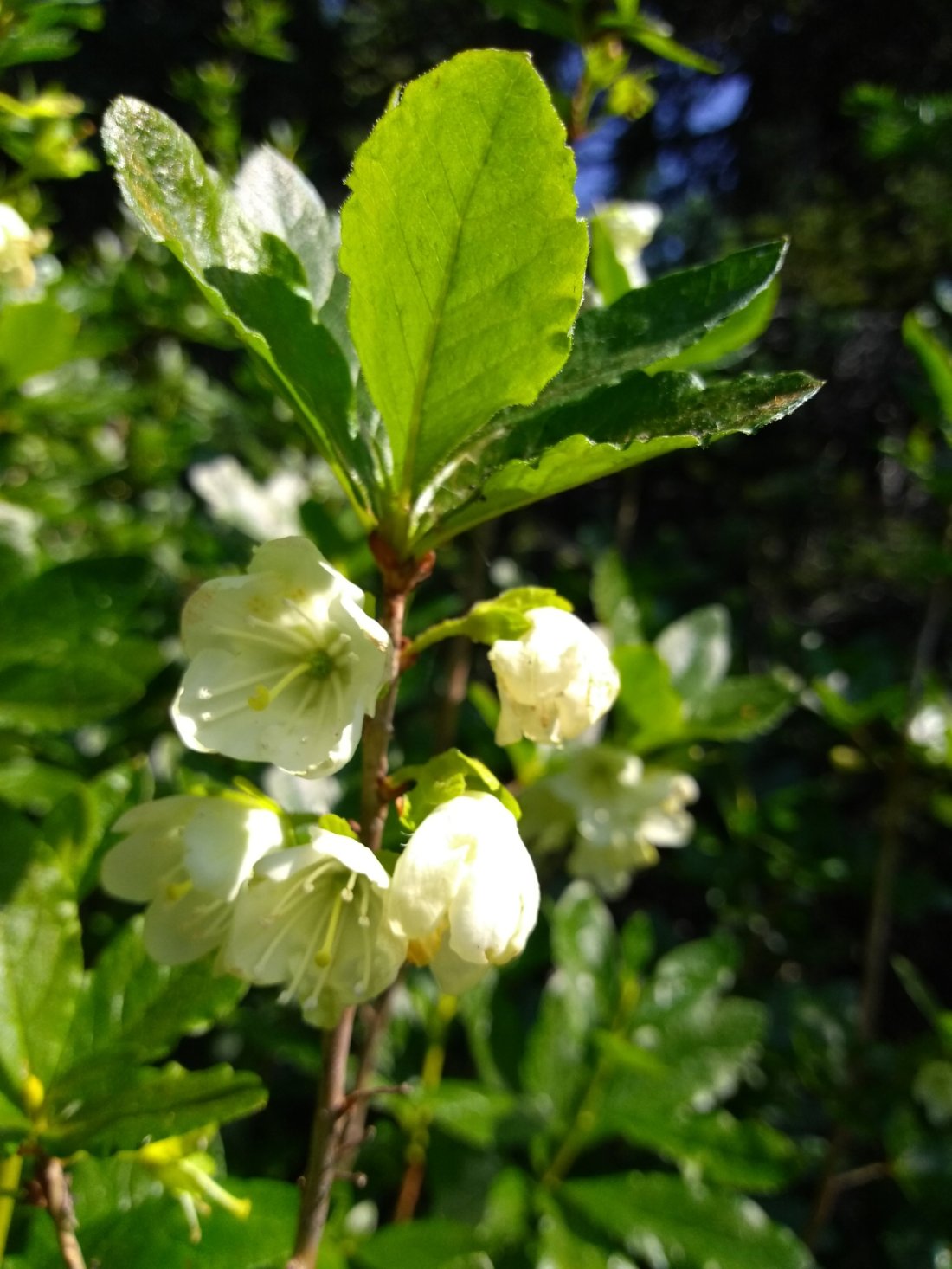 One day I caught my first glimpse of Mt. Ranier! “We’ll get closer to it,” Jay assured me. I couldn’t resist taking a picture anyway. 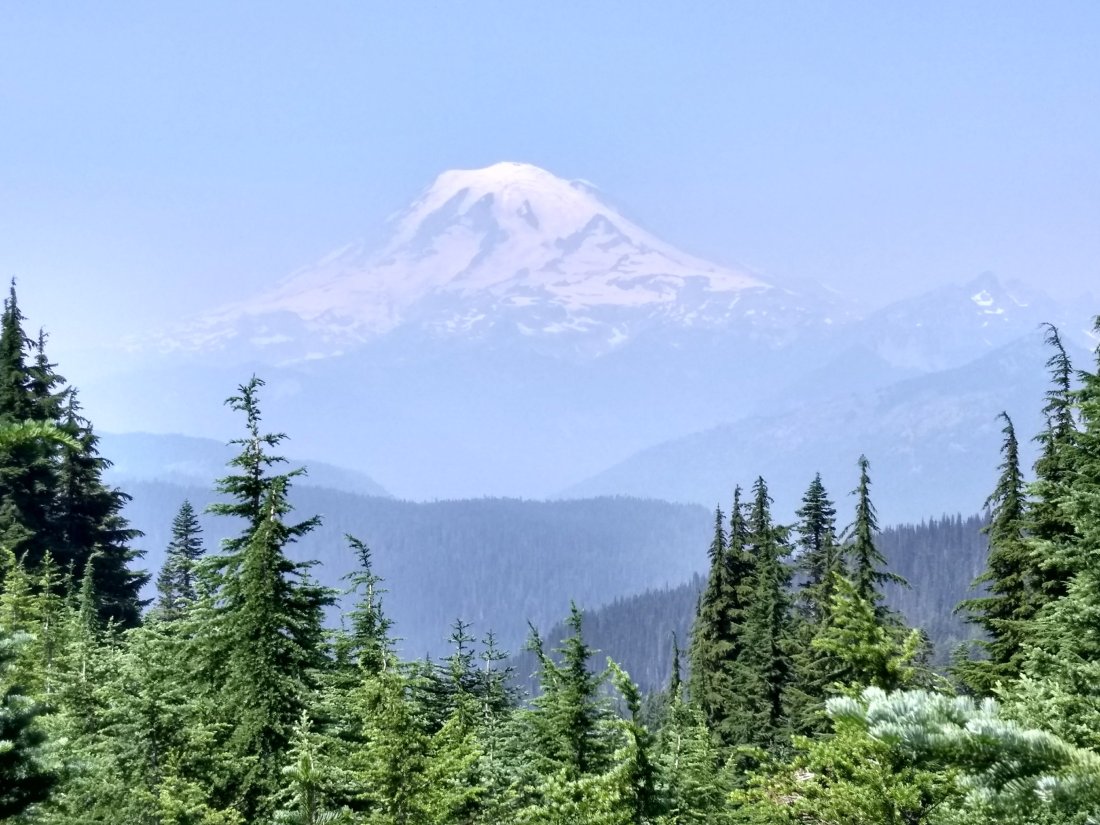 One evening, we were enjoying the trail so much, we walked into dusk! 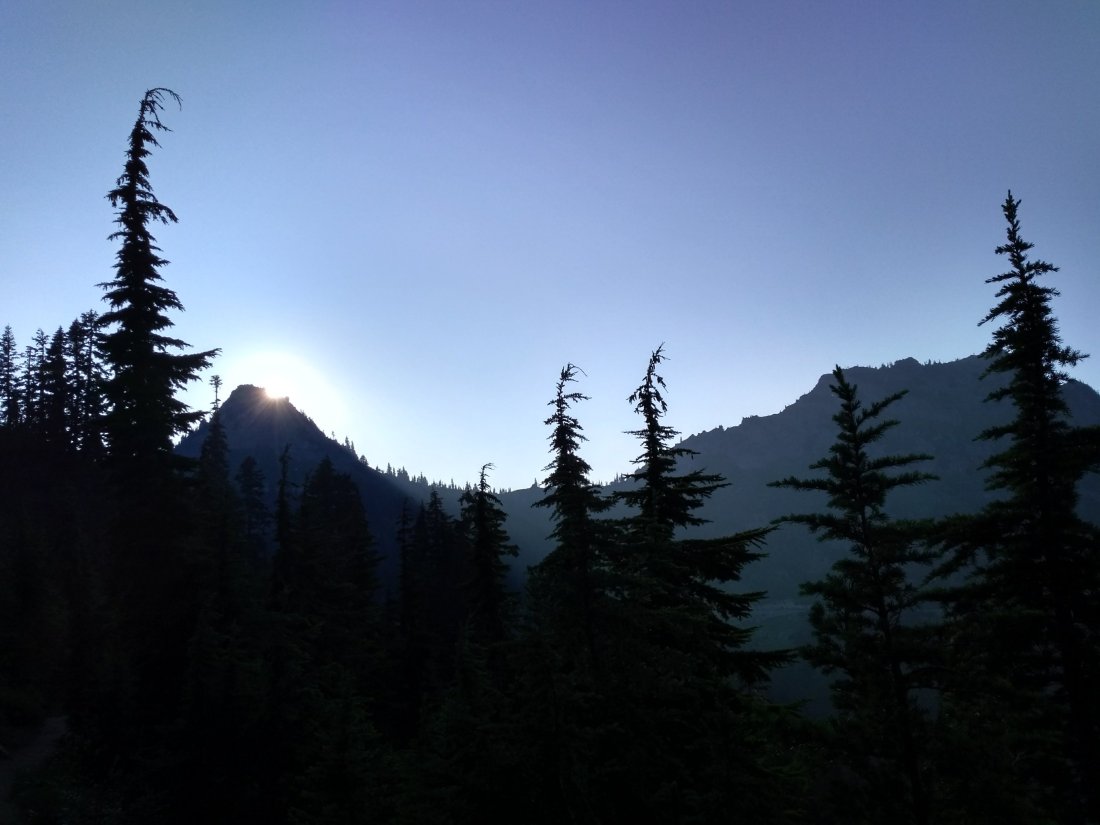 Once, as we crossed a scree field, I heard the distinctive high-pitched “Eeep!” of a pika! These incredibly cute relatives of rabbits live at high altitudes and don’t hibernate. Instead they spend all summer harvesting, drying, and storing grasses, to be ready for winter. I fondly imagine them spending the winter cozily in their burrows, eating summer hay, telling stories, and playing bobstones! 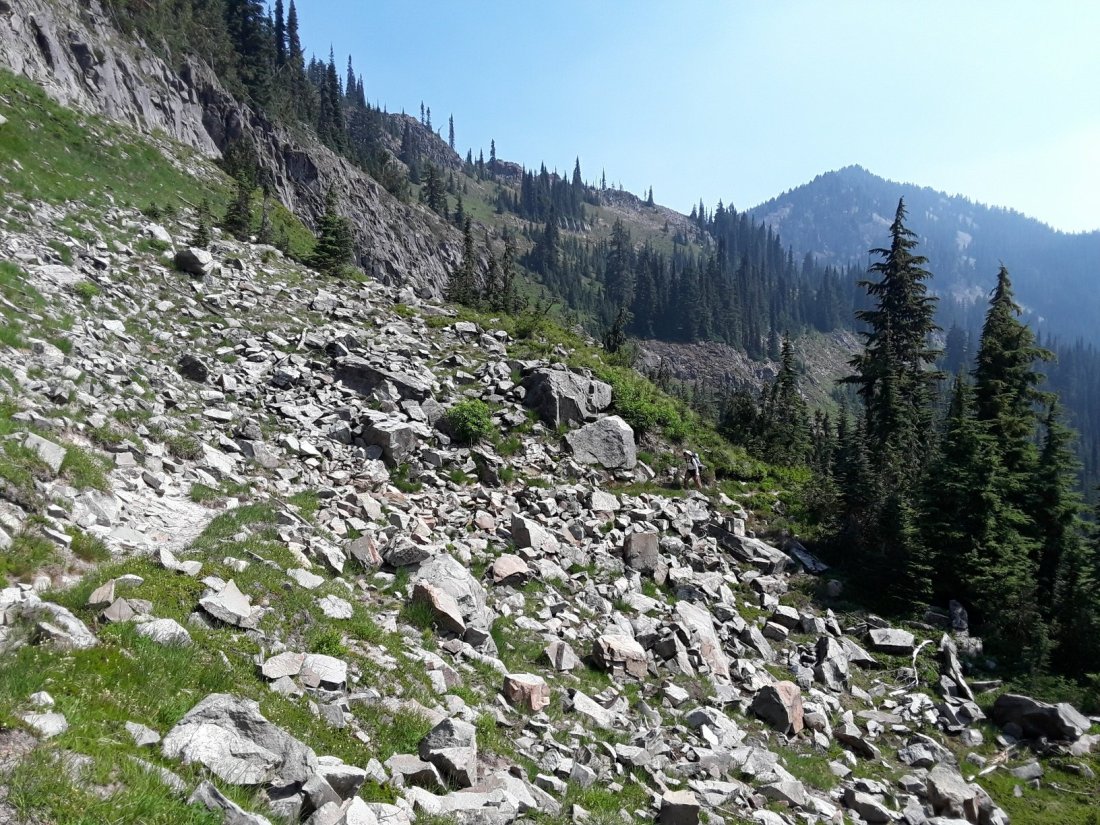 We passed Sheep Lake early one morning. The still water provided a perfect reflection, prompting frivolous thoughts such as, “I wonder if animals are ever startled by their own appearance when they come for a drink?” 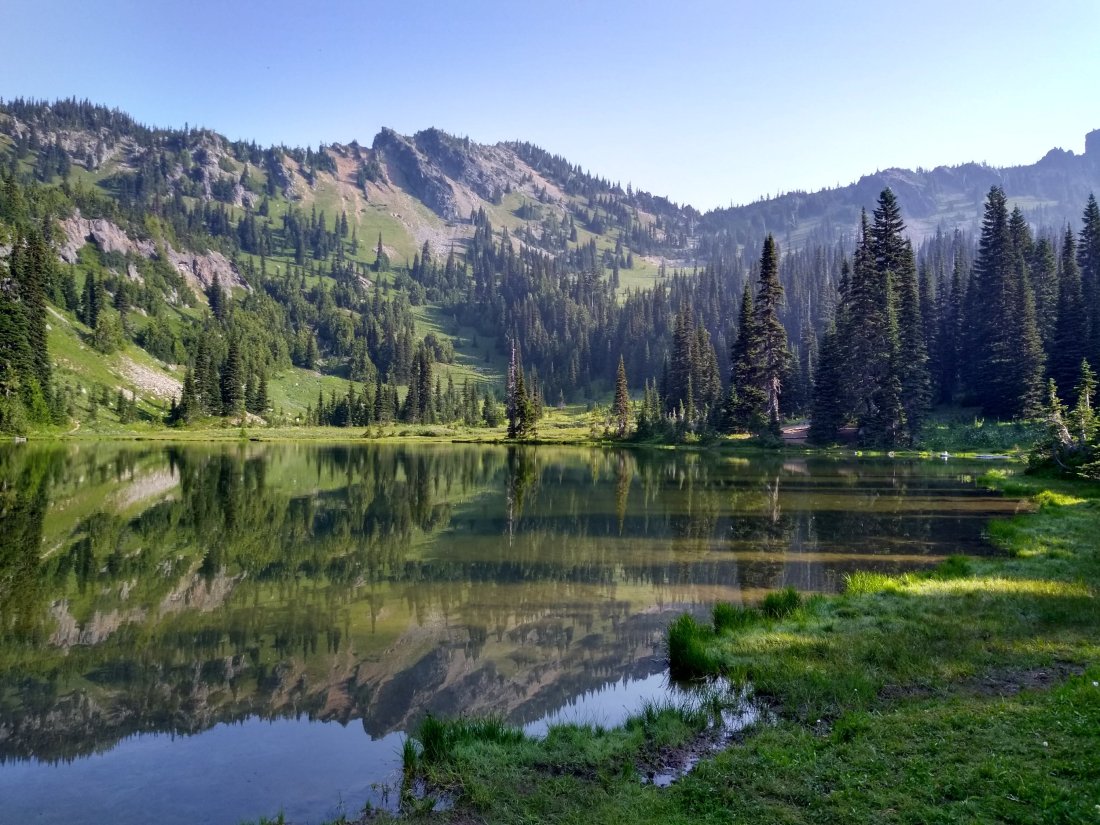 Just past the lake, I saw a small ground squirrel sitting atop a boulder, busily eating seeds. He was much too busy to bother with silly things such as ephemeral, watery reflections! 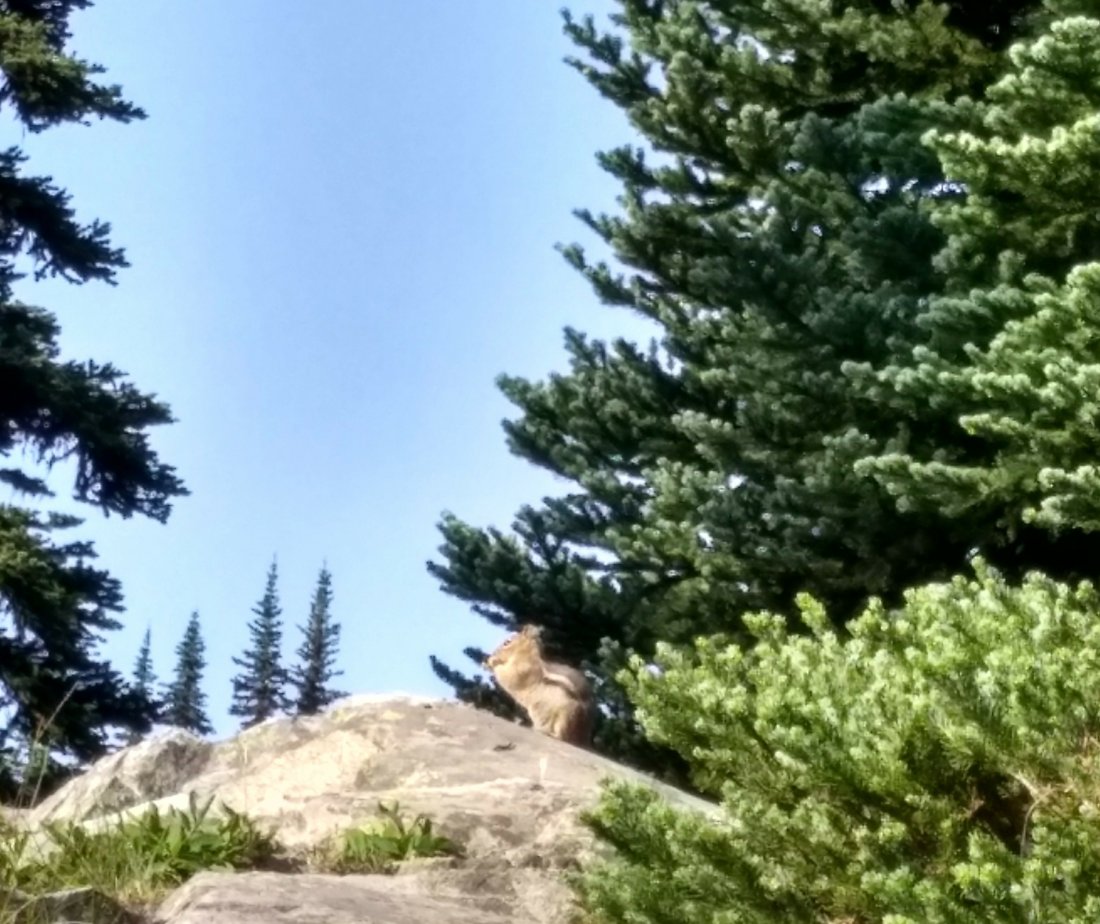 For two days we hiked through patches of burned forest and sections of old clear-cuts. Huckleberries abounded in the older clear-cuts, slowing forward progress considerably. I also discovered that blueberries taste rather tart after I’ve been grazing on huckleberries! In the newer burns, soot worked through socks and shoes, coating my feet in fine black powder. 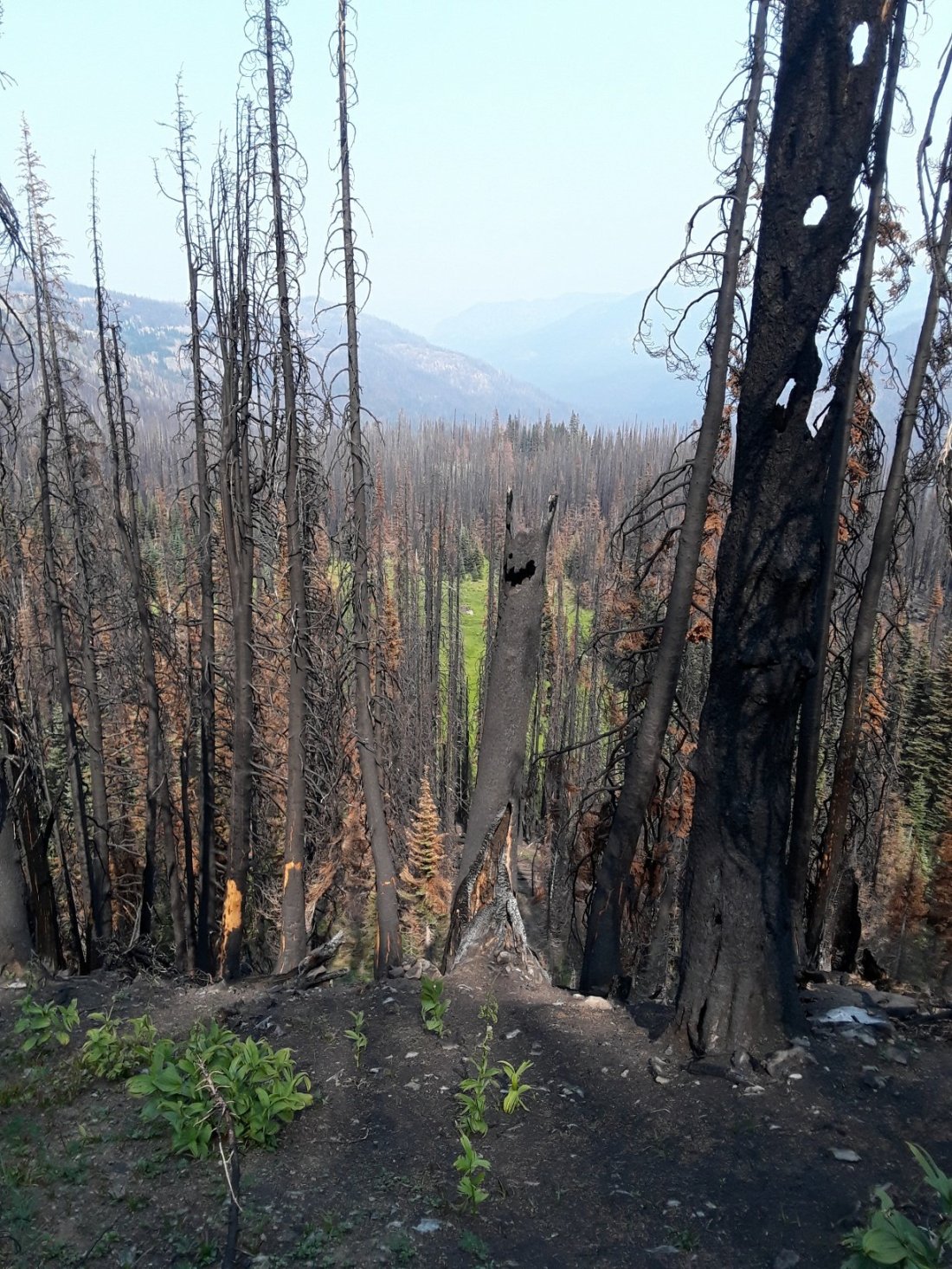 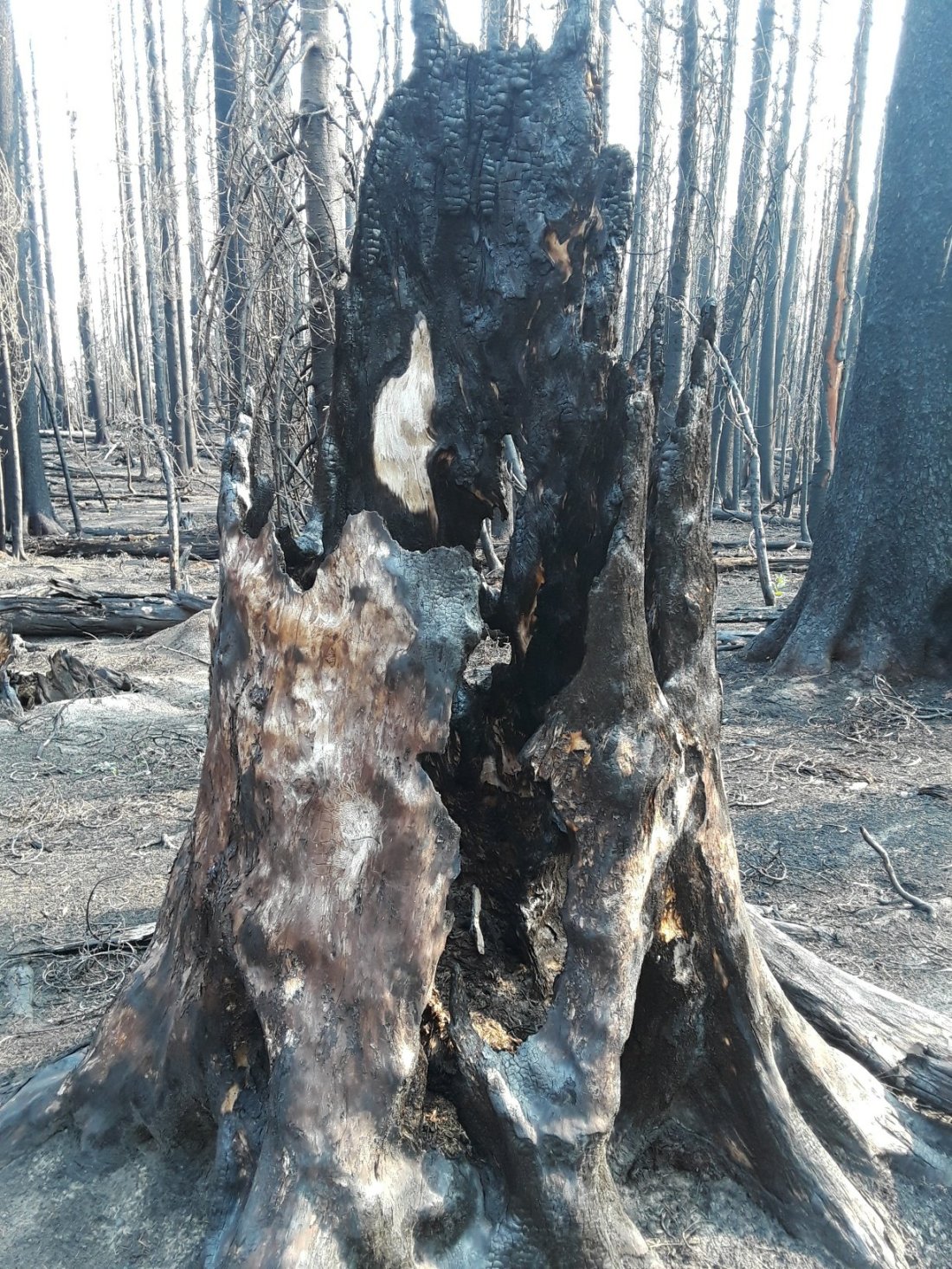 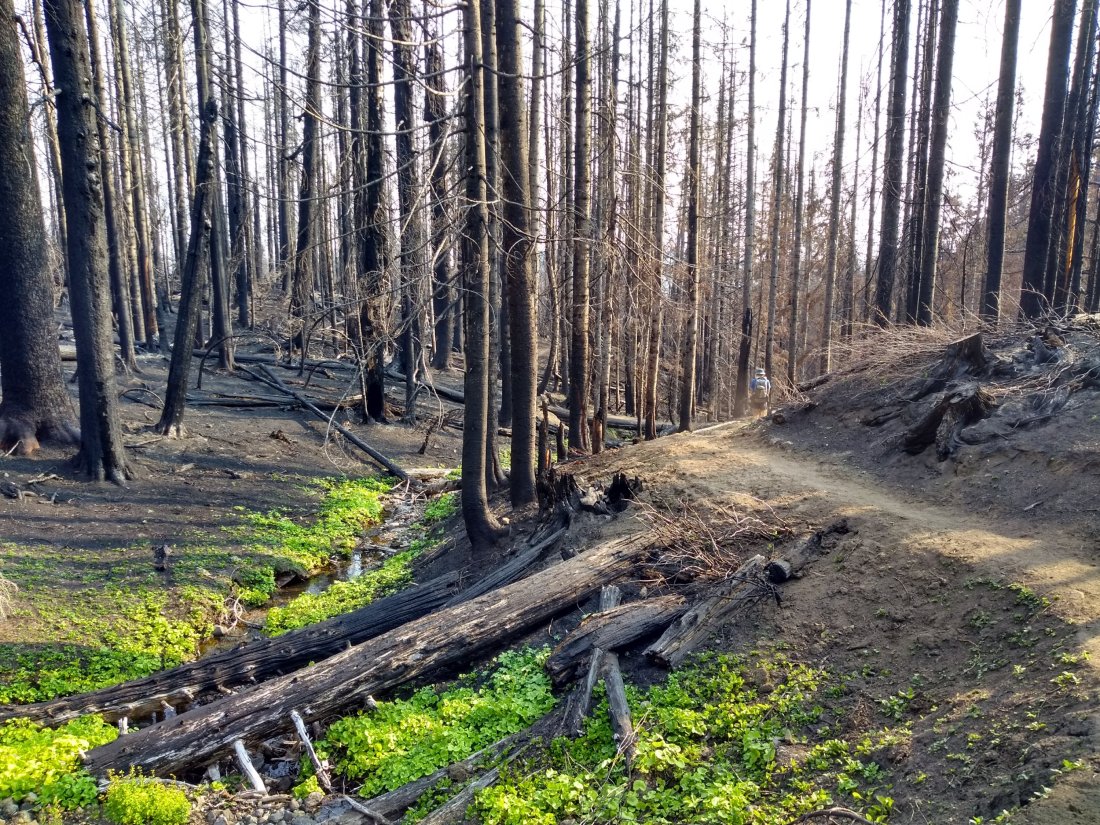 On the fourth day, we met a trail crew, the North 350 Blades, a volunteer group who cares for the PCT from the Canadian border south to White Pass. Paul told us more than 200 trees had been cut after last year’s burn in order to make the trail passable. When I expressed my heartfelt gratitude, they laughed, and Annalise told me, “We do it for fun!”

I loved all the fireweed busily colonizing last year’s burn! 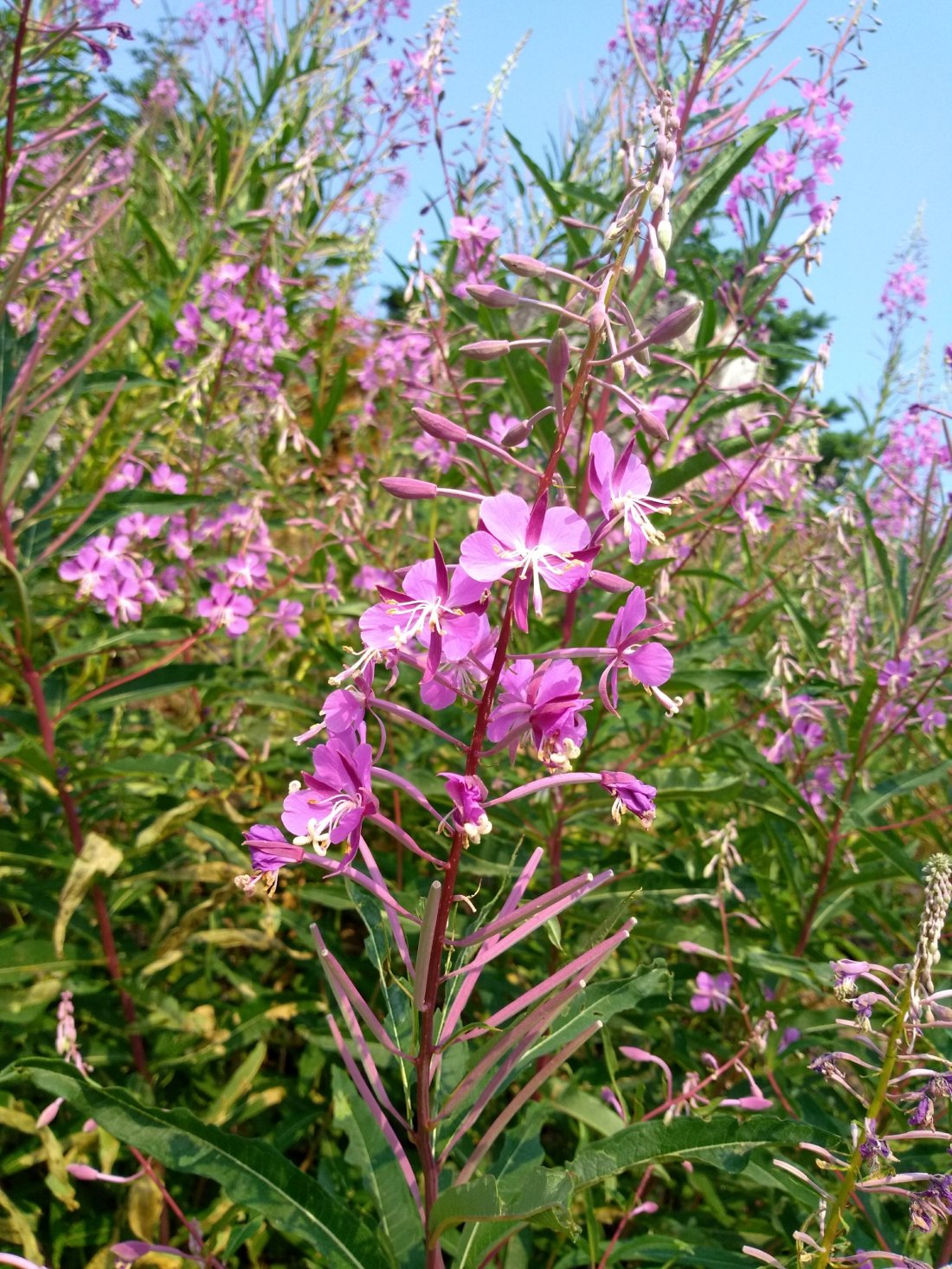 On our fifth day, we found the most gigantic mushroom I have ever seen! 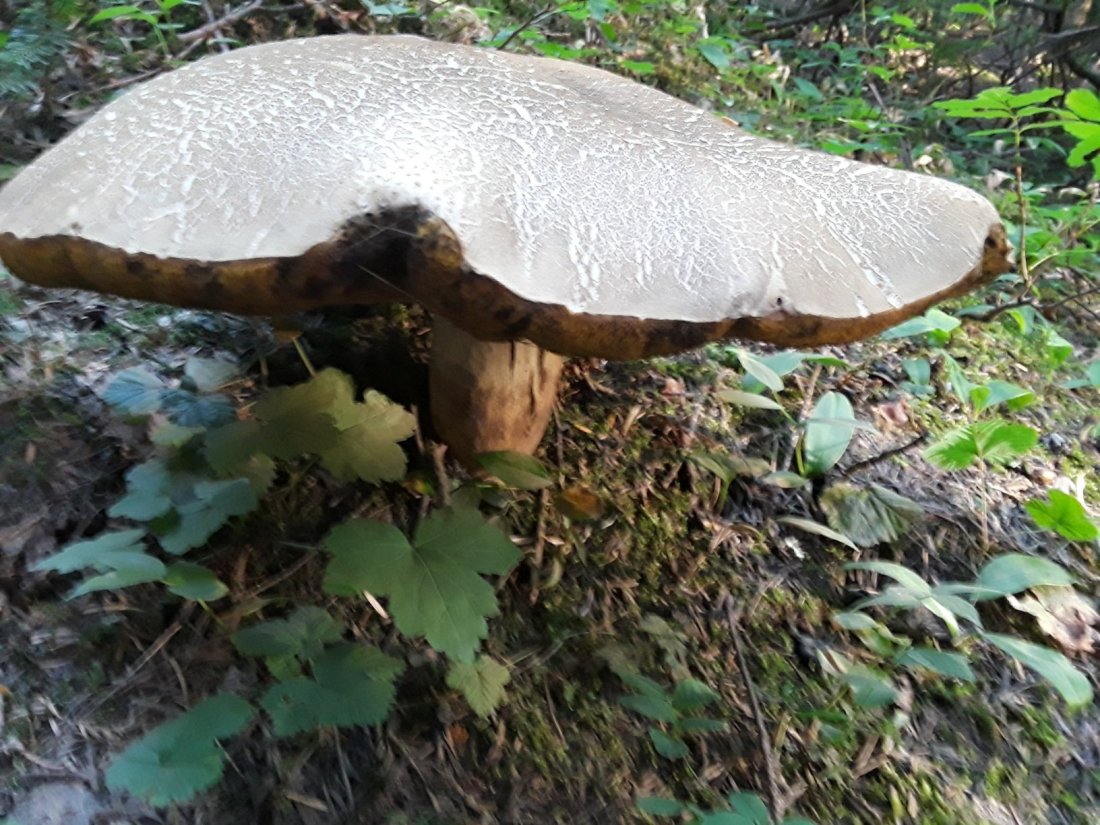 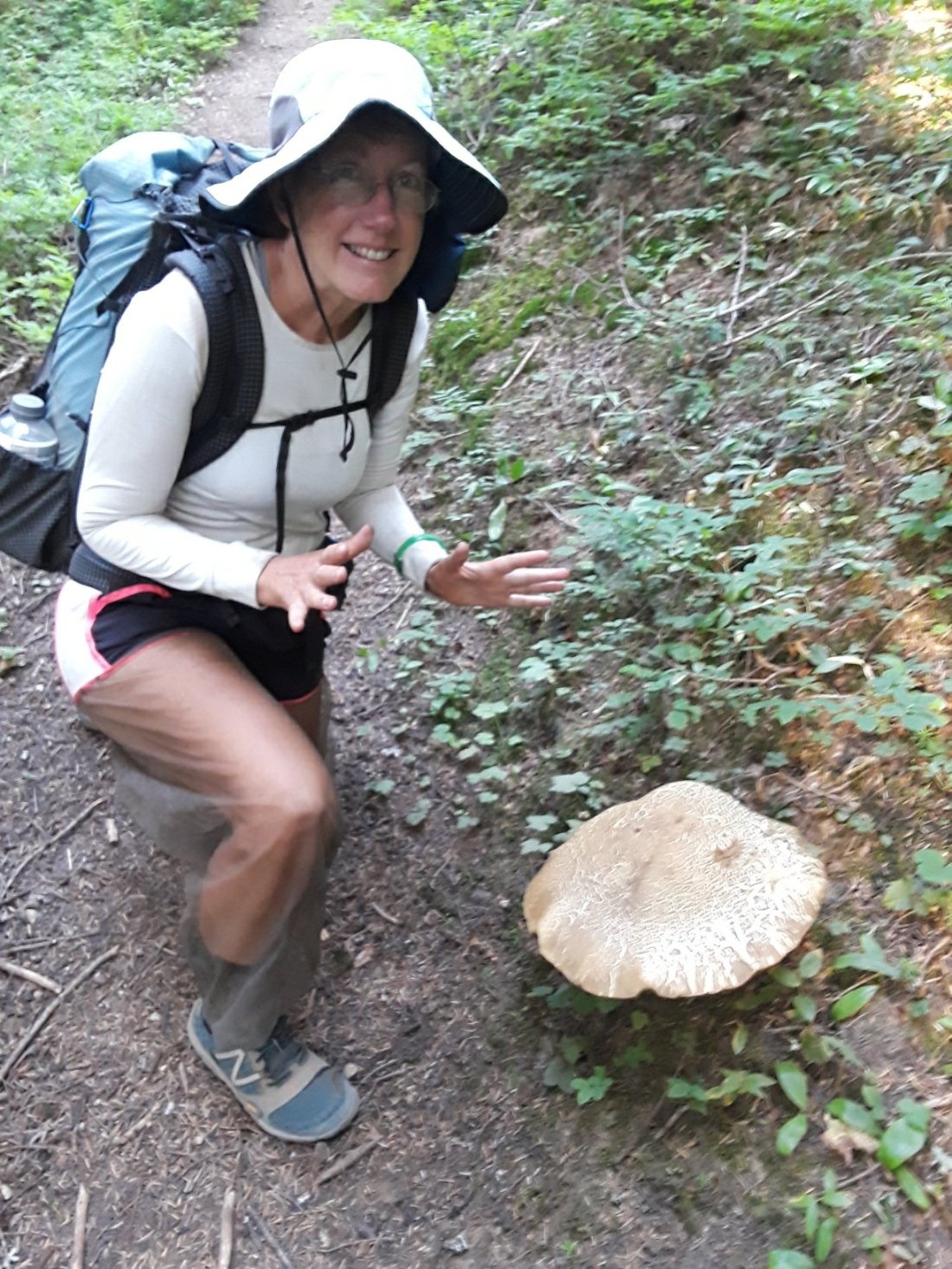 We also saw a great deal of elk sign. I learned that elk poop smells like horse manure. 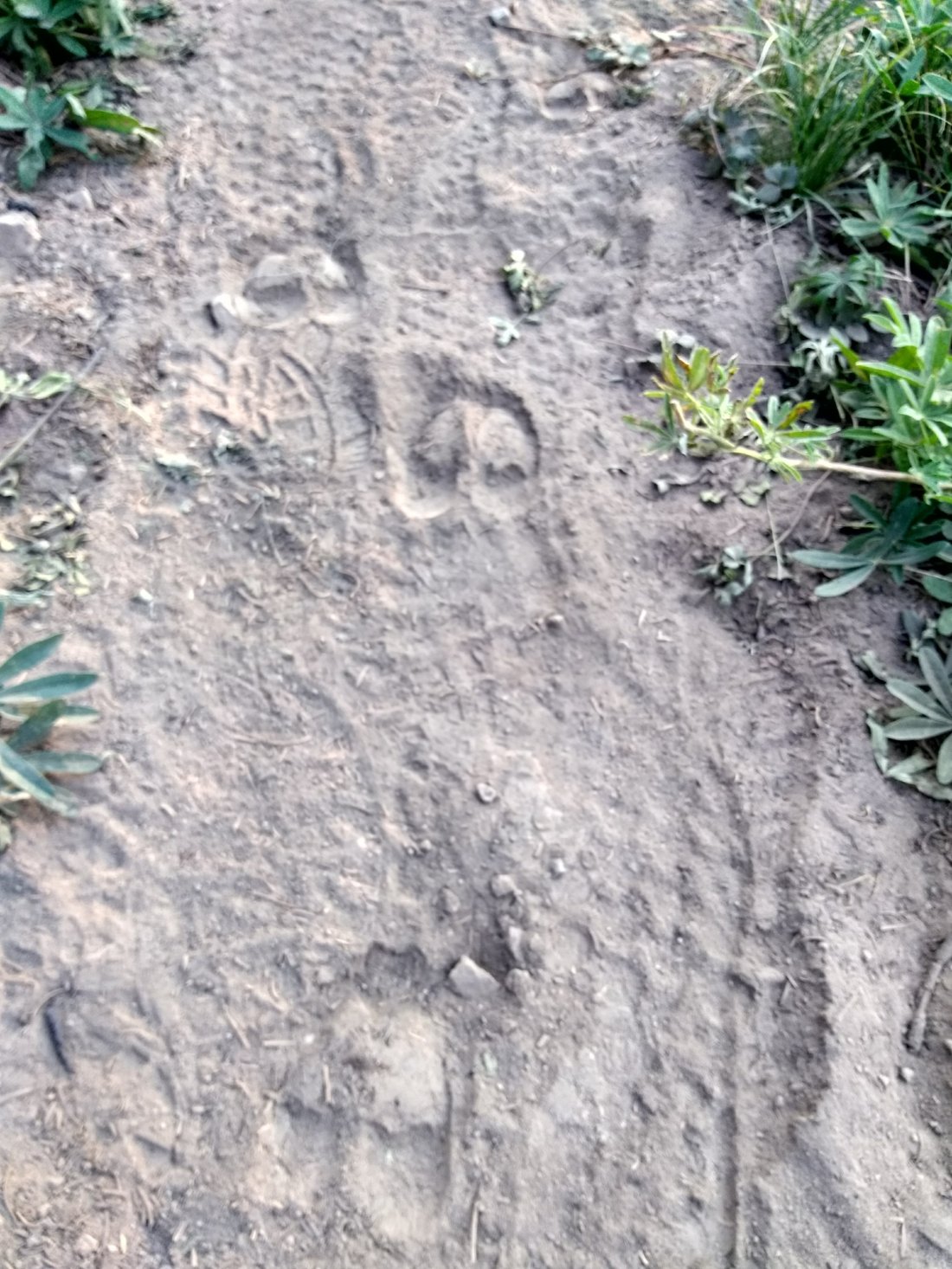 Our fifth night, we rounded a corner to see a hiker erecting his tent in an adjacent flat spot. A smooth, even area just down the trail invited us to stop also. Though the day still had two hours of light, we couldn’t resist such a lovely clearing, surrounded with green trees, a welcome sight after all the burned areas we had hiked through. As I prepared for bed, I was amazed to see that rare commodity – phone service! I delightedly sent emails to family before contentedly drifting off to sleep…

16 thoughts on “Creeks and Berries”