Much of the Camino de Santiago leads a peregrino (pilgrim) on country byways, walking past scenes of bucolic tranquility. Cows graze in green pastures, sheep nibble on hummocks of grass, chickens scratch near vegetable gardens, and apple trees often line the lanes.

This morning, as we walked beside a huge field occupied by a small herd of cows, we were astonished to see one bull acting downright frisky! He leaped and pranced and bucked and charged across the grass. He ran up to other cows and pushed against them, sometimes poking at them with his horns. I was reminded of a puppy, trying to engage older dogs in play. And, much like a puppy with aged companions, this bull only met frustration. The other cows moved slowly along, heads down to the important business of grazing, often obliquely managing to get a tree between themselves and their playful mate.

Jay and I stopped walking, watching the far off cows in fascination. Suddenly, the bull raised his head and looked across the field. “He’s noticed us,” Jay observed.

The bull lowered his head, pawed the ground, then charged towards us, running flat out down the hill!

I quickly checked the fence, made of only a single strand of wire, certainly not enough to stop a bull, bolting at top speed! To my relief, I also noticed a long row of round hay bales lining the fence, each about five feet in diameter.

“He can’t jump the bales, can he?” I asked nervously. Just to be on the safe side, I edged myself behind a stout oak on the edge of the road.

The bull continued his charge, looming larger and scarier with each heart beat. He no longer resembled a frisky puppy to my mind! Jay and I watched, frozen in the moment, as a ton of muscle, bone, and horns streaked across the field toward us. Just a few feet from the protecting hay bales, he skidded to a stop, hind feet slewing around as his forefeet braked mightily.

For a long moment, none of the three of us said anything. Jay, recovering first, joked, “I wonder if it was my red coat?” But the bull had given his all in his long dash, and merely snorted, then ambled slowly away, looking like any other grazing bovine.

A farmer walked towards us, checking the fence with a wooden club. He looked out at the bull and muttered something that sounded like, “Toro tonto!” (Silly bull!)

I couldn’t resist asking what the bull had been doing. I’m afraid my mangled Spanish wasn’t at all grammatically correct as I stammered, “Hola! ¿Que hace, el toro?”

The farmer good-naturedly let out a stream of Spanish, of which I only caught the words “quiere” (wants) and “corre” (run). I figured maybe the farmer was telling me that the bull was just in the mood for running!

Another pilgrim, a couple of hundred meters down the road, came up to us, his face alive with wonder. “Wow, I wonder what set him off? Was he charging right at you?”

“Well, it certainly felt like it. I’m glad I’m not a matador,” Jay laughed.

“Yes, and I’m glad of the tree!” I added, heaving a sigh of relief. One never knows what will happen on the Camino!

We reached our hostel at the small town of Castromaior with enough of the afternoon left to go adventuring. Half a mile uphill lay El Castro de Castromaior (the hill fort). This archeological site of a Celtic town/fort showed habitation for 500 years, from 400 B.C. to 100 A.D.

A sign gave an aerial view of Castro de Castromaior, with a large grassy enclosed space, a corner given over to dwellings, and several surrounding trenches which could have provided boundaries for livestock (according to Wikipedia).

I entered the dwellings through the single opening, tall walls which might have sported a wooden gate long ago. 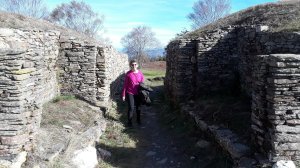 Jay chose to walk atop the large inner wall first, circling around to look down into the rock homes. This picture, taken from the “gate”, showing Jay as a tiny figure on the skyline, delineated the huge area of this castro.

Enchanted, I threaded my way through the maze of rock walls. My imagination once again leapt into action, picturing thatched roofs, clucking chickens, children calling to one another from rock doorways!

Jay, too, enjoyed contemplating the ruins up close. 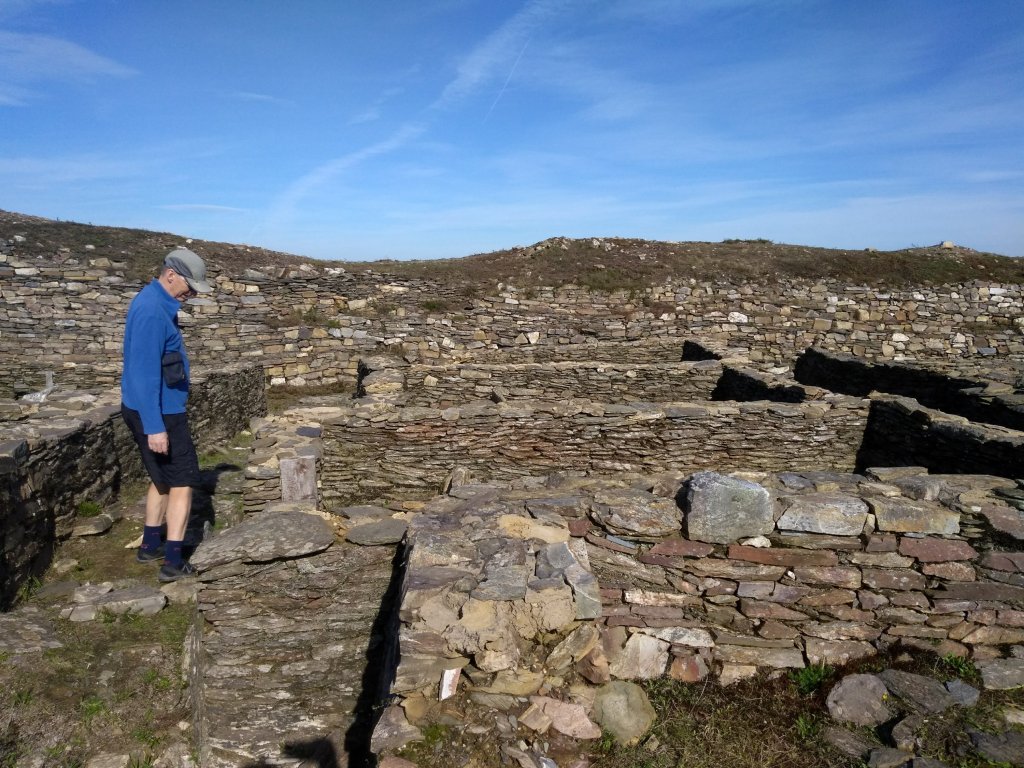 I was intrigued to see that each circular room had its own fireplace. This room had two!

We wandered for well over an hour, the only two people on this vast hilltop. I looked into each room, peered between walls, circumnavigated the outer edge, and climbed stairs to the tops of walls. Near the end of my explorations, Jay patiently waited for me on stone benches designed as part of the walls. Amazing to think that he could sit where inhabitants might have carded wool or shucked peas over 2,000 years ago!

From being frozen in the moment by a charging bull to sharing a seat across two millennia, one can never predict what the Camino will bring.