This morning we crossed from New York into New Jersey!  We have now completed 12 of the 14 states which host the Appalachian Trail.  Only two more states to go!

About lunch time, we arrived at the top of Wawayanda Mountain.  We had encountered no hikers all morning, hiking through quiet forest.  At the top of the mountain, a family was eating lunch.  Jay and I decided to take our noon meal a little further, to a viewpoint.  When we arrived at the turn-off to the view, through the trees we could hear a sizeable group of people laughing and talking.  We decided not to crowd in on the party, and went on.  Suddenly, the trail narrowed and dived over a rock ledge.  We looked over the edge to see a whole stream of people coming up the mountainside!  Unbeknownst to us, we had arrived at the Stairway to Heaven, an extremely popular day hike for New Jersey locals.  A quiet lunch was definitely out of the question.  We cheerfully opened our food bags on the rocky ledge, and prepared to enjoy the living torrent of humanity ascending the mountain.

We talked to many people as we ate lunch, then continued to talk as we descended the trail.  Most of the hikers we met did not notice our packs, and assumed that we were day hikers like themselves.  “How much further?” was a common question.  But since we had ascended the opposite side of the mountain, we had no idea of the length of this stone staircase!

“You’ve got a bit of a ways to go,” I told one questing hiker.  She laughed, and continued.  But I thought of my answer, and realized it was a typical southernism.  In the south, distance often is described in rather general terms.  “A right far piece” is much longer than “a good ways”, which in turn is farther than “a bit”, with “spitting distance” being quite close.

The trail was so narrow, we often had to take turns as we descended, stepping off the trail to let ascending hikers pass.  By the time we reached the bottom, we had probably seen over 200 people!

About halfway down, Jay mused, “If we’re descending the Stairway to Heaven, where do you think we will end up?”

Where did we end?  In Pochuck Swamp, with Pochuck Suspension Bridge crossing Pochuck River.    The bridge is an amazing bit of engineering, a huge suspension bridge set down in the middle of the swamp, just for crossing the river by foot!  A large trail crew had torn up much of the boardwalk before the bridge.  But it has been so dry lately, it was easy to walk beside that section of the boards.  It was a truly lovely three miles, with long walkways winding past fall flowers, cattails gone to seed, rushes above our heads.  I kind of hated for it to end!  It was a beautiful section of New Jersey, like nothing else on the whole Appalachian Trail. 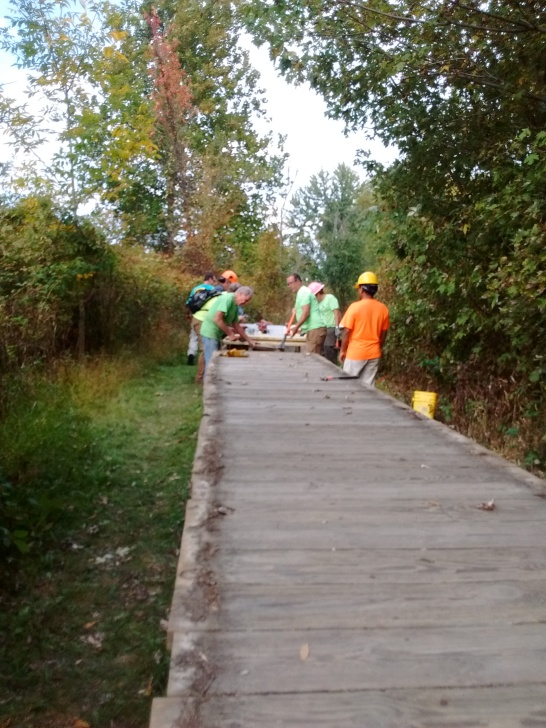 4 thoughts on “Stairway to Heaven”