Places and situations along the Camino de Santiago are so very different from my regular life, I often wonder if perhaps I’ve stumbled onto a Hollywood movie set.

The Iglesia San Miguel presides over a weekly market in the town of Estrella. This morning, we deviated from the marked route of the Camino de Santiago, hoping to encounter a tradition carried from the 12th century when the church first began to be built. Amazingly, Jay found it! 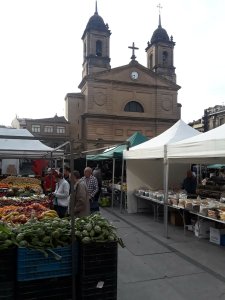 I wandered between canvas covered stalls, admiring piles of produce. It staggered my brain, thinking of the centuries of people shopping in this plaza!

An hour later, we came around a corner of the Camino, to find ourselves presented with another sample of centuries of tradition.

With a sense of dislocation, I immediately recognized this wine fountain from Camino movies, books, and blogs. To actually be here seemed impossible!

Jay bravely shouldered his way through the crowd of laughing, talking pilgrims and returned with a small sample from the fountain.

Nearing Villamayor de Monjardín, we spied the ruined Castillo de Monjardín on a hilltop. Originally built by the Romans, the commanding position was employed in battles between Moors and Christians in the 900s and used by King Sancho Garces of Navarre in the 12th century. Looking up, I felt transported into the pages of a novel, with looming castle above!

That evening, we walked into the small town of Los Arcos. The Iglesia de Santa María beckoned with an open door. We entered, only to once again be stunned speechless. 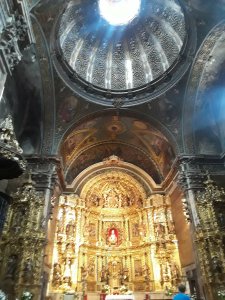 Another door beckoned us into a courtyard filled with roses.

The next morning, from the edge of the village of Sansol, we looked across the Río Linares to an almost identical village, Torres del Río. I marveled at the need for defense which caused these two towns to be separated by a moat-like river and stoutly fortified walls. 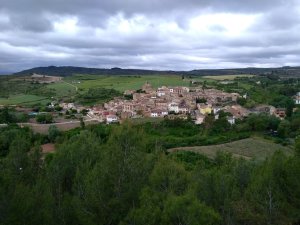 Later that day, walking through the town of Viana, Jay suddenly remarked, “We’re on the old wall of this town!” I looked down, to see ancient stones under my feet, continuing several stories below us. Ahead, slides and seesaws invited children to play. Now, here was something not even Hollywood could have dreamed! A playground in place of battlements and ramparts!

I laughed, cheered to see something to which I could relate. I thought of the many sights from the last two days. Though I had often felt out of place, each day had also brought miles of natural beauty – plants and animals proclaiming glory. And so, once again, I leave you with pictures of nature – the earth in which we all live.

10 thoughts on “Reality or Movie Set?”