The upper basin of the Sil River created a region called Bierzo, a bowl shaped valley, well guarded by mountains on all sides. The unique economy and flora of this historically isolated place filled our walk with fascination.

Wines, apples, pigs, peppers, and pears have unique flavors and characteristics here. As we walked, we passed many private gardens and a few orchards growing the Reineta apple, the Conference pear, and beautiful red peppers. My mouth watered at the thought, but so far there had been no opportunity to taste these specialties.

Bacon and pork were served in every café. However, finding whether we were eating locally produced meat or not was beyond my feeble Spanish.

Vineyards stretched up and down hills, across the whole valley. Jay and I had the privilege of eating a few luscious grapes from some escaped vines. The fall colors of the leaves were almost as intoxicating as a glass of wine would have been! 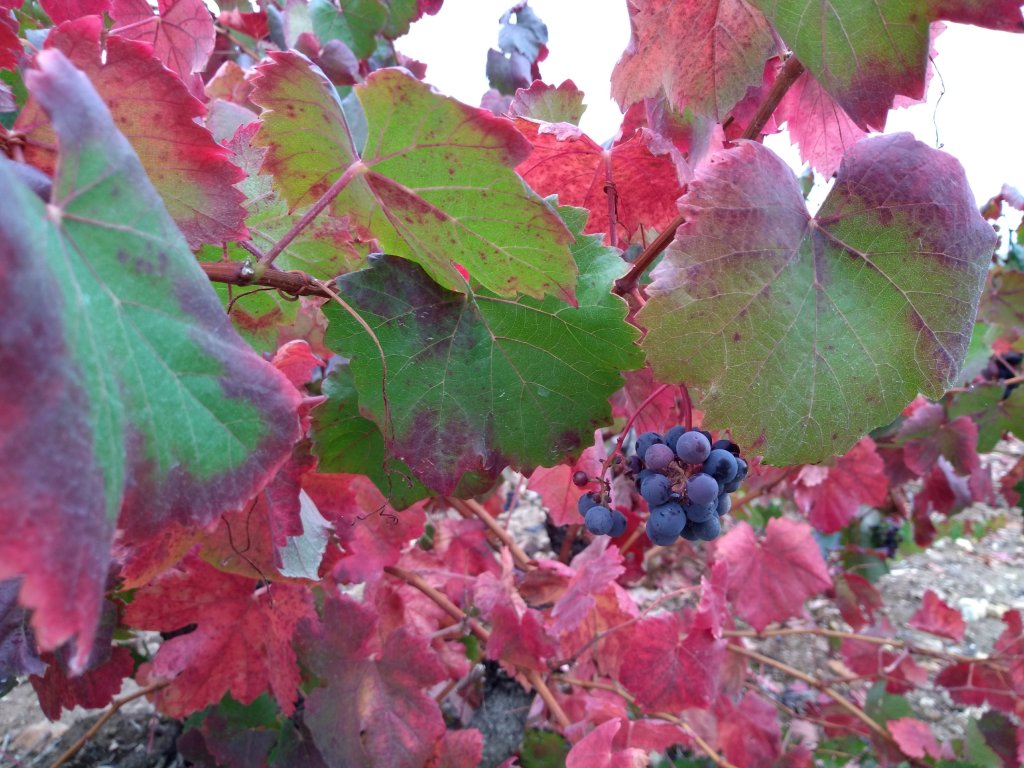 In the small town of Molinaseca, we passed the Sanctuario de Nuestra Señora de Las Angustias. This church had beautifully sheltered porticos on either side of a front door plated with black metal. The sign explained how generations of pilgrims and Galician harvesters, as they passed, would take a splinter from the door, while offering a salute to the Virgin with their scythes or staffs. Over the ages, the door’s surface slowly disappeared, until it was finally protected with metal plating.

Inhabited from before the 11th century to the 18th century, the Castillo de Los Templarios in Ponferrada, with 8,000 square meters of space, dominated the town. 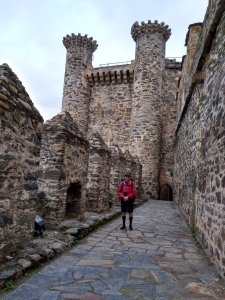 Signs in three languages helped tourists to understand the economics of such a structure. My imagination soared with scenes of constant construction over five centuries, workers hauling rocks from the quarry, shaping walls and fortifications, expanding this center of power. Then, of course, there would be the noise of cows, sheep, goats, chickens – all the food needed for this medieval stronghold. I pictured the daily parade of workers heading out to the gardens, orchards, and vineyards. As political priorities changed over the centuries, who knew how many times the average citizens found themselves with new masters and rules?

During these three days, we walked on gravel roads and paved roads. Occasionally we were observed by a local inhabitant, sometimes from the top of a slate roof. Always we felt surrounded by natural beauty and fascinating history.

In the town of Cacabelos, a giant wine press made us pause in wonder. 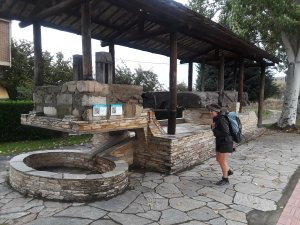 From Pieros, we took a side trip to the Castro de la Ventosa, site of an ancient fortified town high on the flat top of a hill. Possibly inhabited as early as 800 B.C., this hilltop had a commanding view.

Jay met a local couple who told him that the best way to see this archeological site was to walk 2 kilometers around its circumference, seeing the ancient walls and enjoying the expansive scenery.

It’s the side trips that remind me why I identify so well with a snail. We progress on this pilgrimage “poco a poco”. I had to laugh the day we stopped at a café, La Ermita, and saw my mascot immortalized as a pilgrim on a sugar packet.