One entertainment while hiking the PCT has been watching landmarks change perspective over the course of hours and days. Seeing views in slow motion, as we hiked past Mt. Ashland and caught glimpses of far away, snow-covered Mt. Shasta, emphasized the unique nature of our rambling days.

Jay and I noticed many alpine clearings, covered with a huge monoculture of pussy paws. Each time the trail skirted a clearing, the fragrance of these wildflowers swamped our senses. Jay smelled honey, I smelled intense, almost overwhelming burned caramelized sugar, and a forester we met described it as “the smell of three day old gym socks.”

We enjoyed chatting with the forester. “These pussy paws are a pioneer species,” he told us. “Cattle and sheep have grazed here for much of the past 100 years, especially in the early 1900s. A friend of mine remembers hiking with her father to the Silver Fork Basin and seeing clouds of dust rise in the air as they approached. The soil is so fragile up here. Heavy rain or wind can disrupt struggling plants as the fine, light particles of dirt are moved. It is very exciting to see the ground getting covered with these first plant colonizers. Pussy paws are a sign of hope.”

Here is a close up picture of a pussy paws plant, and a panorama of alpine clearings covered in these flowers. 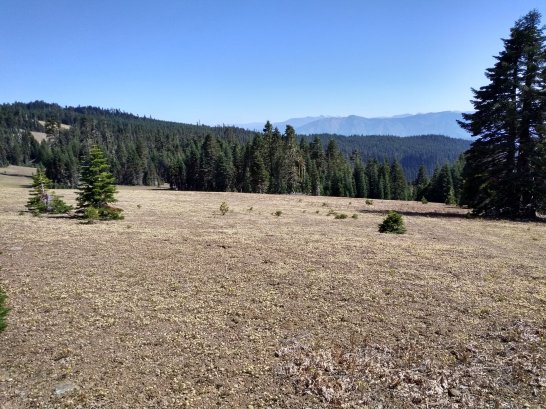 While eating dinner, a day hiker stopped and offered to take our garbage! We were so overwhelmed with such an unexpected and thoughtful offer, I forgot to take his picture or get his name. But thank you, unknown hiker! It was wonderful to suddenly have more room in our packs that night and in the next couple of days.

Nearing Siskiyou Pass, just as the sun threw long legs over the horizon, we stopped, transfixed with an early morning show of white fog streaming through a gap between steep-sided canyons. Brilliant sun picked out highlights while shadows preserved a myrtle green and slate blue background, and sapphire blue sky arched overhead. 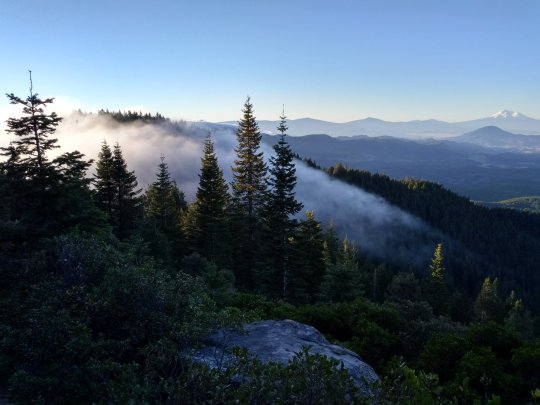 Five miles from our lovely morning beginning, the trail crossed a dirt road with a sign half hidden in the trees.

My imagination was immediately captivated. I could almost hear the creaking of wooden wheels, the calls of pioneers and gold seekers as they urged their teams up the mountain.

Another sign high on a tree informed us that “Callahan’s” could be found down this overgrown road. Although we hadn’t planned to stop there, I couldn’t resist the opportunity to walk through history, sharing a trail with long ago frontiersmen and women. Besides, we had been so enchanted with the morning, we hadn’t eaten breakfast yet! Callahan’s Lodge and Restaurant promised to fill our empty stomachs.

Another distinctive landmark on our horizon today was Pilot Rock, a volcanic plug which helped guide early travelers through the Siskiyou Pass. As we passed the turn off for the trail which climbs Pilot Rock, two young men came bounding down the path, faces alight with exhilaration, jubilant triumph spilling from their every pore!

“You must have just climbed Pilot Rock,” I observed, smiling at their obvious joie de vivre.

“Yes! It was awesome!” they assured me, beaming.

For a brief moment, this dome of hardened magma beckoned me upwards. But the pull of the PCT was stronger, so I continued contouring around the monument, promising myself to return someday.

After a day of walking through conifer glades, skirting meadows filled with pussy paws and other flowers, seeing an incredible mosaic of ecological diversity, we camped near an unnamed spring. Soda Mountain loomed to our right, reminding me that the Soda Mountain Wilderness, through which we had been privileged to walk, had been created by grassroots efforts, including it in the Omnibus Public Land Management Act of 2009 which President Obama signed into law on March 30, 2009. That evening, as a frog lullaby began at the spring, I felt an upwelling of thankfulness to the unknown people who had worked so hard to protect this beauty.

With only five and a half miles to hike before reaching Highway 66, we spent most of our walk today photographing wildflowers, playing with the settings on my phone camera. Tonight we plan to stay at Green Springs Inn, before beginning a week of cat sitting for Jay’s sister in Ashland. This Oregon part of the hike is allowing us to make connections with many of Jay’s family – or at least with their pets!

So I close this post with a positive plethora of wildflower and butterfly images! 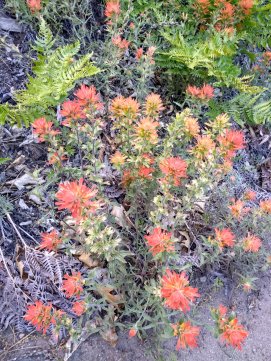 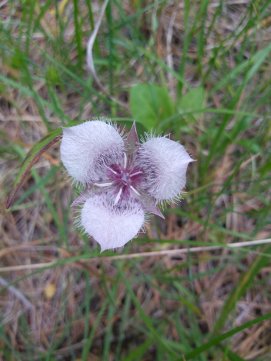 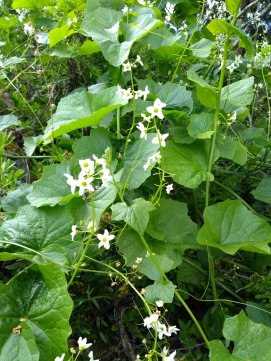 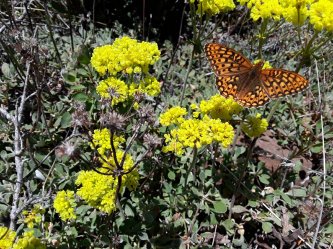 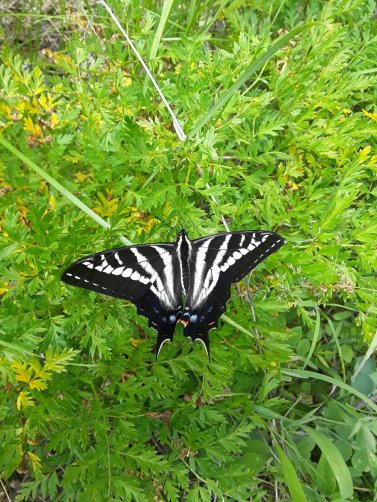