This narrative was not easy to write. Most of my blog posts are light-hearted celebrations of life. Though this post is definitely a celebration of life, it is not in the least light-hearted. However, I felt it was important to write, in order to let others see how valuable it is to think logically, without panic, during an emergency.

Jay wrote much of the content of this narrative. But I put the narrative in third person, in an effort to bring some emotional space between us and the events of August 11.

Jay’s eyes fly open to a confusion of darkness and collapsed tent. “A bear?” he wonders. “No, nothing is moving.”

Suddenly he registers a steady, burbling exhalation coming from beside him. Urgently, he reaches for Sarah. She lays still, face down under his questing hand. Something heavy rests upon the tent material on her back. A tree branch. Jay throws it off, shouting Sarah’s name. No response. He reaches out, suddenly feeling a warm, greasy liquid pooling around her head. Horror envelops him.

Struggling to his knees, Jay lifts Sarah’s face out of the blood. The gurgling noise continues below her, and he realizes he is hearing air escaping from the punctured sleeping mat, burbling through her blood.

Sarah begins to moan and struggle in his arms. Blood is pouring from a large tear in her neck. Thinking he must stop the blood, he presses fingers into her neck. Sarah cries out in pain, and Jay feels sharp bone fragments inside. Blood continues to pour out.

He struggles to lift Sarah to a sitting position. Realizing that he needs more hands, and remembering the hiker camped just a few yards down the trail, he shouts for help. The hiker, Jeff, answers. While he is coming, Jay fumbles through the tangle of collapsed tent, sleeping bags, and gear. He finds a glove, then a buff, which he tries to press against Sarah’s wound. She resists, so he hands it to her, and she holds the cloth below the upper cut.

He finds a flashlight and gets his first good look at Sarah. The bleeding has slowed. “Is she running out of blood?” he wonders. “No, she’s still conscious. That’s got to be good.”

“Do you hurt anywhere else?” he asks anxiously. He’s not sure whether to believe her when she answers in the negative. The tent and sleeping bag are so tangled around her lower torso and legs, he can’t tell if she is hurt there or not.

Jeff arrives with another flashlight. Together Jay and Jeff find the emergency locator and activate it. 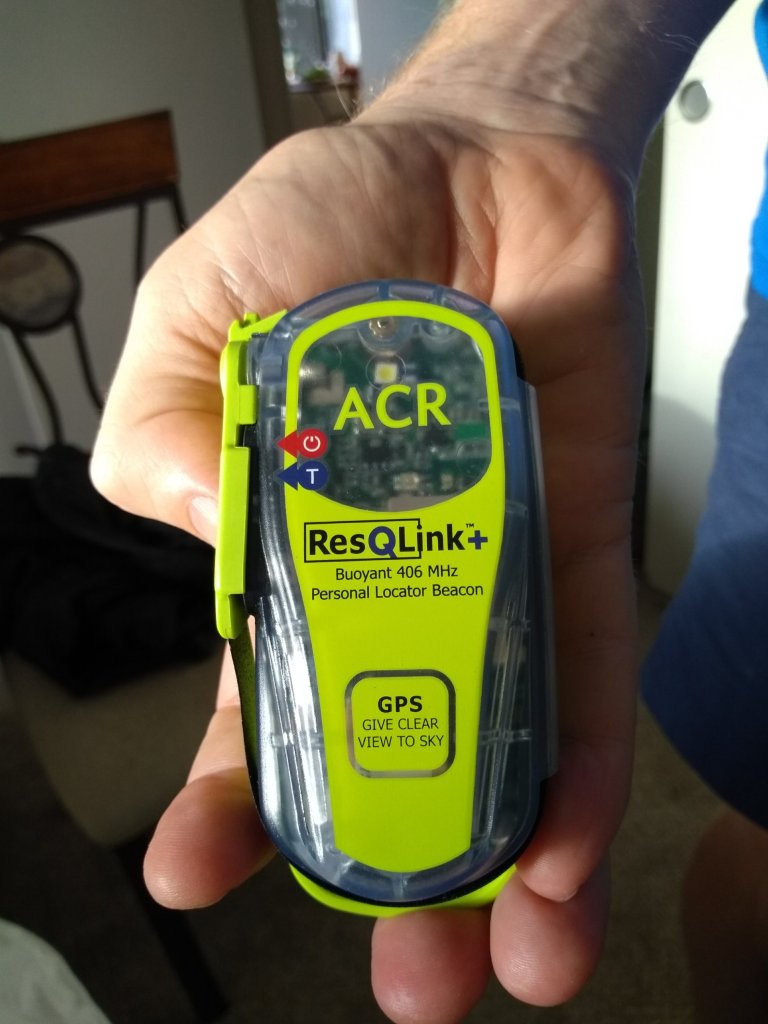 “There’s a trail angel parked just half a mile from here,” Jeff tells Jay. “I’ll go see if he can help.”

Sarah is still conscious with only slowly seeping bleeding. Worried about shock, Jay tries to lay her down. She shouts in pain, and the bleeding starts again. Quickly he raises her back to a sitting position.

Jay remembers that there is phone service here. He searches through the jumble of downed tent and supplies, finding his cell phone. He kneels with Sarah leaning against him, and calls 911.

“911. What is the nature of your emergency?” The dispatcher’s voice is calm.

“My wife is bleeding out.” He blurts his biggest fear.

The dispatcher leads him through a litany of questions and answers. Though Jay tells her three times that they are on the PCT, 20 miles south of Snoqualmie, he can tell that she doesn’t really understand. She finally takes his number and tells him she will call back after initiating a rescue.

Sarah’s bleeding has slowed considerably, so he tries to lay her down. Again, the bleeding surges out afresh and Sarah moans in pain. Jay raises her, and this time sits back to back with her, giving them both some rest and support.

Jay sees the first signs of dawn as rain begins. Sarah is getting cold, and he awkwardly holds his sleeping mat over her. The 911 dispatcher calls to say help is on the way, but when asked for an ETA, she doesn’t know.

Jeff returns, but, concerning the trail angel, he can only say, “He’s incapacitated.” Jay figures the man must be drunk. Jeff calls 911 to try to give the rescue party directions. He asks Jay what else he can do to help.

“Do you have an extra tarp?” Jay asks. “Sarah is getting pretty cold.”

Jeff assembles his own tarp over Sarah and Jay as the rain continues, then leaves to try to meet the rescuers at the nearest dirt road.

There is nothing to do except wait. Sarah needs to pee. Worried about moving her and restarting the bleeding, Jay helps untangle her from the tent. As she moves to do her business, he is able to see that there are no other obvious injuries. They settle back together under the tarp, sitting on Jay’s sleeping pad. Jay texts his sister, Nancy, for moral support. She answers, which is a great comfort to him.

Four hours after the tree branch fell, the rescue team arrives with several strong young men, one EMT, and a stretcher/gurney on one wheel.

“You can’t lay her down. The bleeding will start again!” Jay is anxious that they understand. Though the rescue team has never transported a seated patient, the EMT immediately grasps the importance of Jay’s information, and directs the others to prop up Sarah with the backpacks. 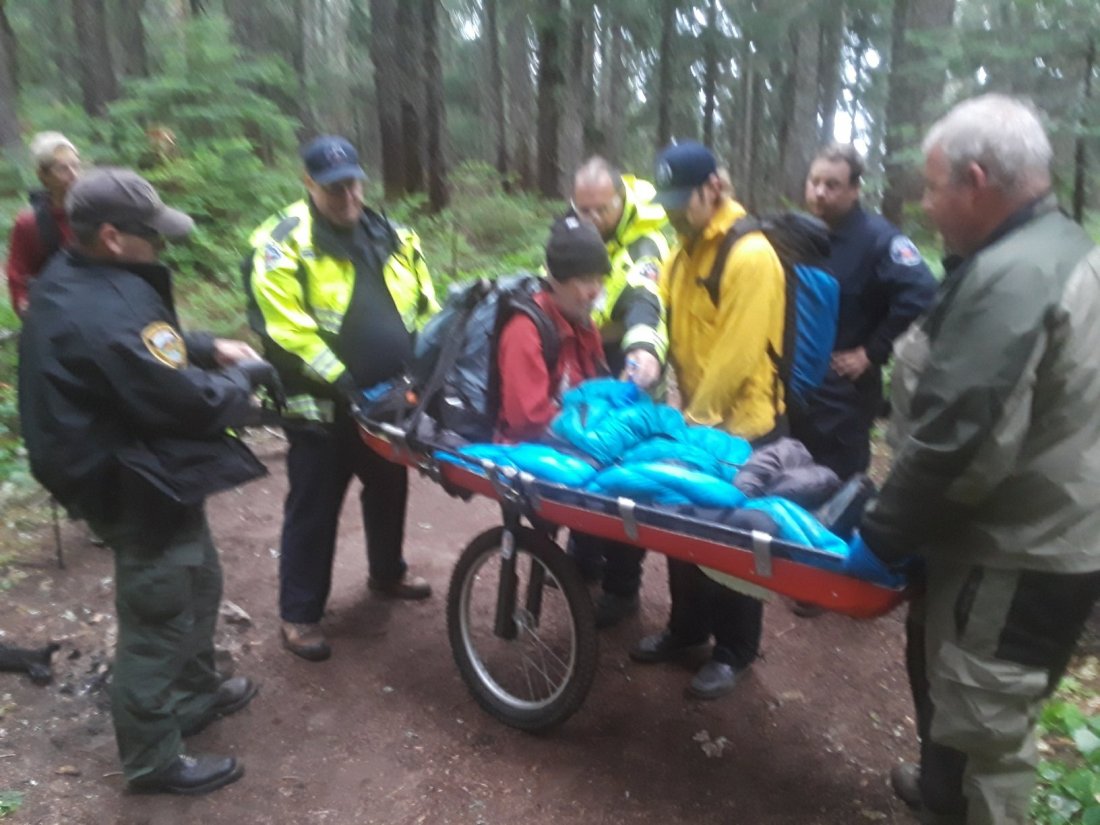 A few of the rescue crew look at the branch. About four feet long, five inches at its thickest diameter, one end is a tangled weaving of branchlets and twigs. It doesn’t really look sturdy enough to have caused this much damage. Appearances are deceiving.

They trace it’s fall back to a very tall tree some distance from the tent, with a screen of healthy greenery between the tree and the tent. We would have never have seen this hanging “widow maker”. The crew reckons it was a combination of the extreme height of the tree and the light wind which brought it all the way to our clearing.

“You know, it’s very good that you activated that emergency locator beacon,” the sheriff tells Jay. “It helped us find you, and cut our response time considerably.”

Sarah is transported for an hour on the gurney, up very steep trail, across rocks, between trees. It’s rough work for the rescue crew. Another hour in a four wheel drive vehicle across bumpy dirt roads brings them to an ambulance. There the EMT takes Sarah’s blood pressure, and Jay sees relief on his face. 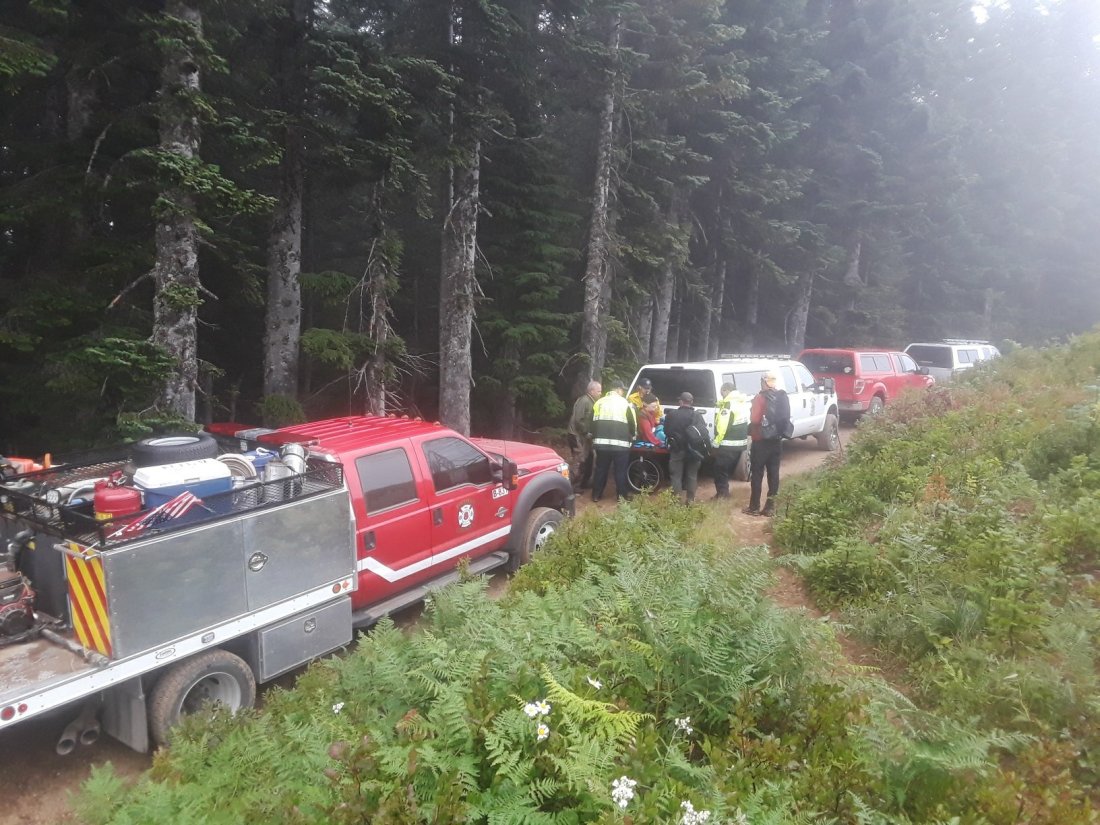 The ambulance negotiates small back roads, then stops at a major highway. Another ambulance driver comes aboard, and suddenly the vehicle is going at high speed, sirens flashing, often in the carpool lane, weaving down the freeway to Seattle.

The ambulance arrives at the Harbor View Medical Center, an excellent trauma hospital, at 10:00 a.m., seven hours after the tree branch fell. From here, Sarah’s health is in the hands of trained professionals. 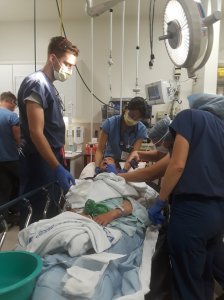 There were so many times during this narrative when panic threatened Jay. His ability to think rationally saved my life that night. He is my hero! Calm, logical, rational thought is a skill a person can practice and learn. We will probably never go into the woods again without an emergency locator. But also, from here on out, I am going to try to practice rational thought more often. For one never knows!

46 thoughts on “Things That Go Whump in the Night!”