The sun beat hotly upon my hat, and a scant half inch of water sloshed in my virtually empty bottle. A trail intersection came into sight, with Jay waiting for me at the sign. “Shall we get water here?”

“Yes! The map says Cascade Creek is just a quarter mile down the Round the Mountain Trail.” I gave a little skip of relief, already envisioning pouring half a liter of clear, cold water into my dusty throat.

We turned off the PCT, walking along the edge of Horseshoe Meadow. I could hear the creek gurgling ahead. Rounding a clump of trees, the much anticipated water came into view – a surging, splashing stream of brown silty mud!

Cascade Creek with Mt Adams in the background

“Oh!” I exclaimed, my shoulders sagging in disappointment. “We can’t drink this! It must be coming from a glacier on Mt Adams.” I consulted the map. “The next water source is Riley Creek, 4.5 miles away. It looks like it comes from Mt Adams also. What if all the creeks are full of glacial silt?”

“Maybe, if we collect a liter and let it sit, the mud will settle, and we can decant the top part into another bottle.” Jay, ever the practical problem solver, didn’t seem phased by this set back. “I could use some sitting time. We’ve been hiking for a while!”

We sat, enjoying the beauty of sunlight and meadow. After ten minutes, the upper half of the liter was definitely a lighter brown than the lower half. We decided to go ahead and decant it, treat it with Aquamira, and see if more of the mud settled out as we walked.

We continued hiking, and happily found clear cold water in a tributary of Riley Creek. Our silty liquid was poured onto thirsty plants, and we refilled with much more palatable water.

Over the next 66 miles, we would see many types of water sources. Here are just a few pictures.

This pounding waterfall liberally sprayed me while crossing at its base.

There’s nothing quite like dipping water from a melting snow field!

We also had the privilege of dipping water from Lava Springs, an achingly cold pool emerging from the bottom of an ancient black lava flow. I didn’t get a picture because I was too busy picking blueberries and joking with Scott and Teri, two PCT hikers we had met several times.

As we climbed higher into the mountains, scenery enchanted! 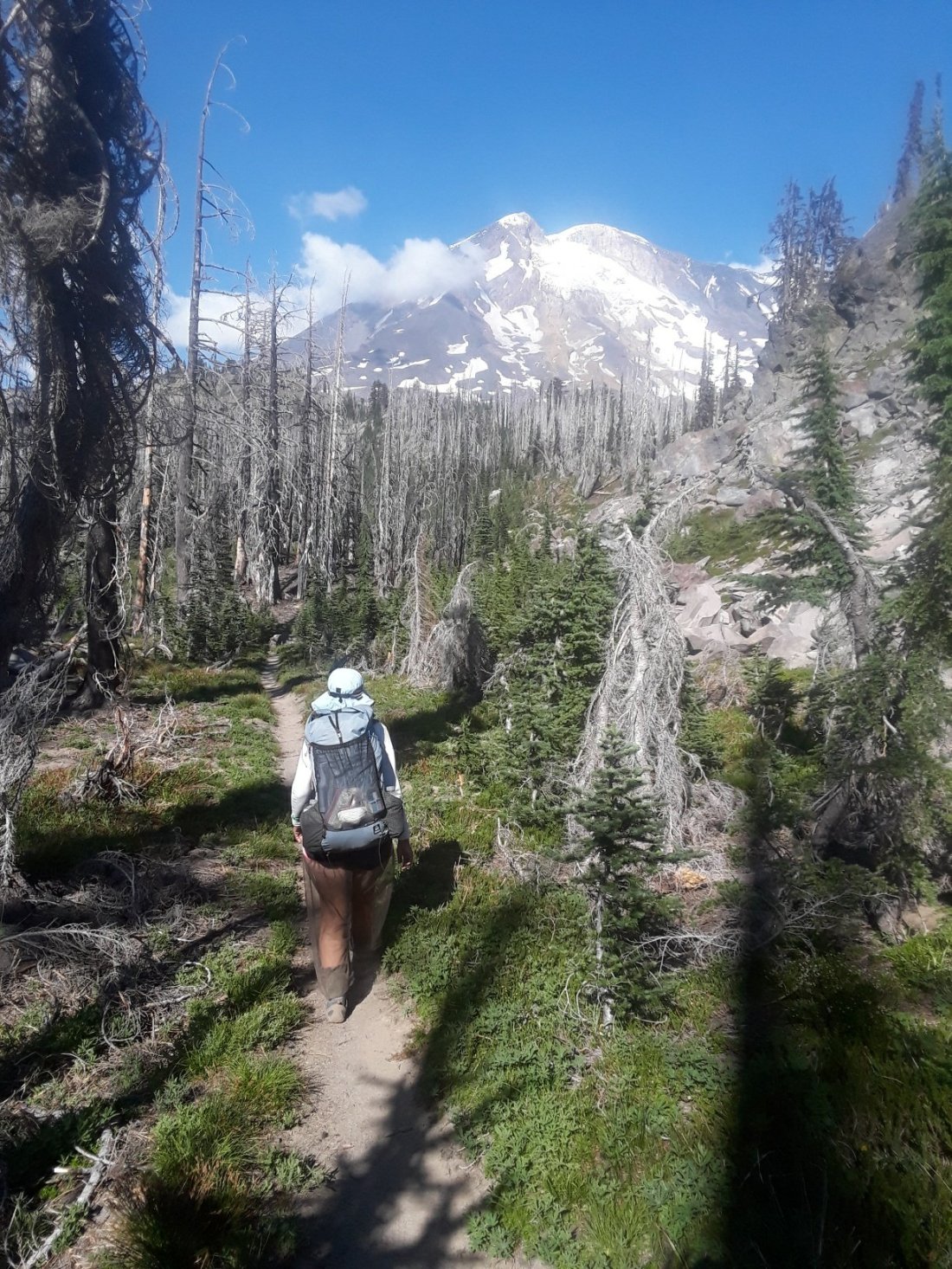 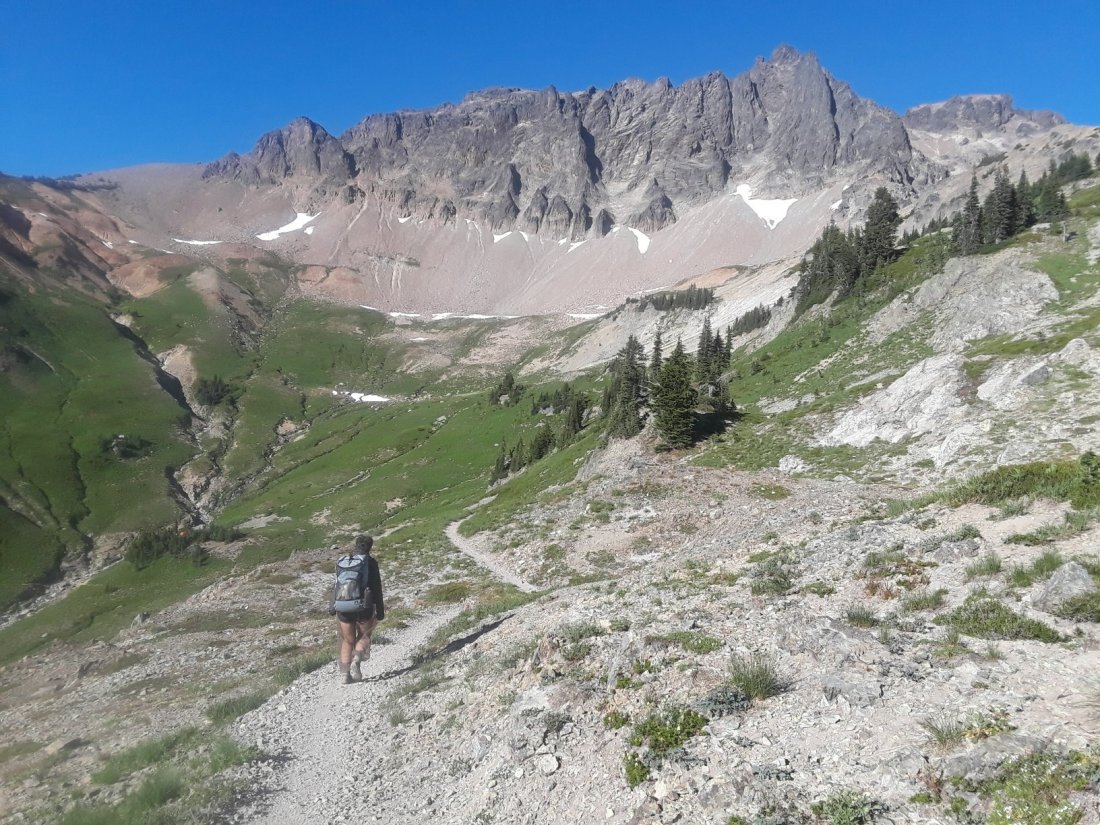 After days, weeks, months of sunshine, on Friday we awoke to lowering clouds, spitting just enough rain to coat leaves with glistening water drops. We donned rain gear and began hiking, leaving the morning’s first footprints on the trail.

We climbed into the clouds. 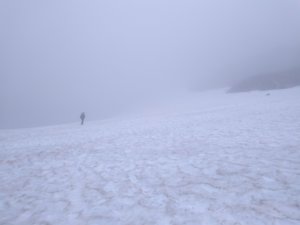 We crossed a very large snow field which went from flat …

At the top of the snow field, we met Lazarus from Cambridge, England, and Sonia from Seattle, WA. Sonia was a bit nervous about our route, climbing 1600 feet into Goat Rocks, walking along the top of a ridge known infamously as “the knife edge”. The wind had picked up a bit, turning rainy mist into horizontal mist.

“I don’t have to do this,” Sonia said. “Unlike the younger hikers out here, I have nothing to prove.”

In the end, Sonia decided to continue, the other three of us assuring her that we would all stick together.

I thought about her words as we climbed onto the ridge top. I was no young kid, needing to prove myself to the world. But I did need to challenge myself, facing once again my fear of heights, slowly whittling away at the acrophobia that plagued me at inopportune times. I needed to walk the knife edge for myself, no one else. 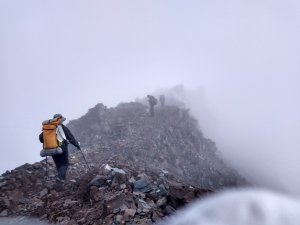 The knife edge of Goat Rocks … 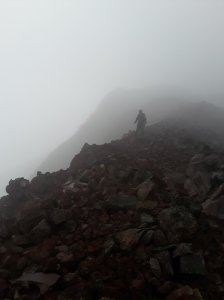 … this is one long challenge!

After several miles of ridge walking through fog and mist, it was such a relief to finally descend below the clouds. The landscape opened, with sunshine chasing shadows in an extravagant game of tag.

My three companions pulled ahead, becoming tiny dots upon the earth.

We stopped for lunch, enjoying a last moment of camaraderie, talking of ourselves as the “fearless foursome”, the “Goat Rocks Gang”. We had encouraged and helped each other for several miles, and felt a bit celebratory.

Ten miles from our early morning beginning, we reached Tieton Pass, to be met with a wall of green florescent tape and a sign informing us of a fire closure, necessitating a nine mile detour down the Clear Fork Trail to Hwy 12. Our adventurous day was not over yet! 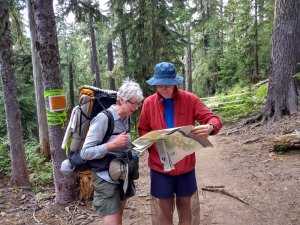 Sonia and Jay look at the map to orient themselves with the fire closure and alternate route.

The Clear Fork Trail sloped steeply downhill from the PCT, and was often overgrown. Yet the loveliness of this little used trail began to give Jay and me a second wind as we were challenged with obstacles and charmed with beauty. 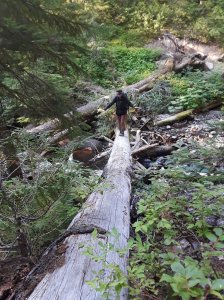 We ate blueberries, huckleberries, salmonberries, and – wait! Were those black salmonberries? Jay and I had never seen such a berry!

We found two flowers completely new to us also.

Pipsissewa, also known as umbellate wintergreen, was scattered through the forest. 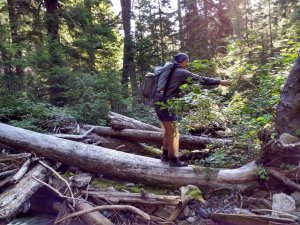 Salmonberries grew next to yet another log crossing, causing Jay to pause and pick a few.

Some of the downed trees were incredibly large!

On Saturday, near the end of our detour, we met two members of a fire crew, heading into the forest in search of a lightning strike reported by a helicopter. We chatted for a few moments. I was in awe of all the heavy equipment they had to carry. They warned us that there was a forest-wide ban on fires. Since we were in the midst of a detour to avoid a forest fire, the fire ban made sense to us. Wishing them good luck, we continued on. 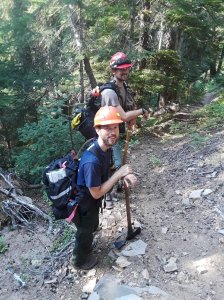 When we reached Hwy 12, we were lucky enough to get a ride to White Pass, where we planned to take a zero day. We were amazed to see a whole fire command center set up.

And so the summer continues. We hike. Firefighters chase smoke and flames. And beauty continues to bloom in the forest, whether people are there or not.

4 thoughts on “Of Pipsissewa, Pinedrops, and Pink Polkadot Pussypaws”