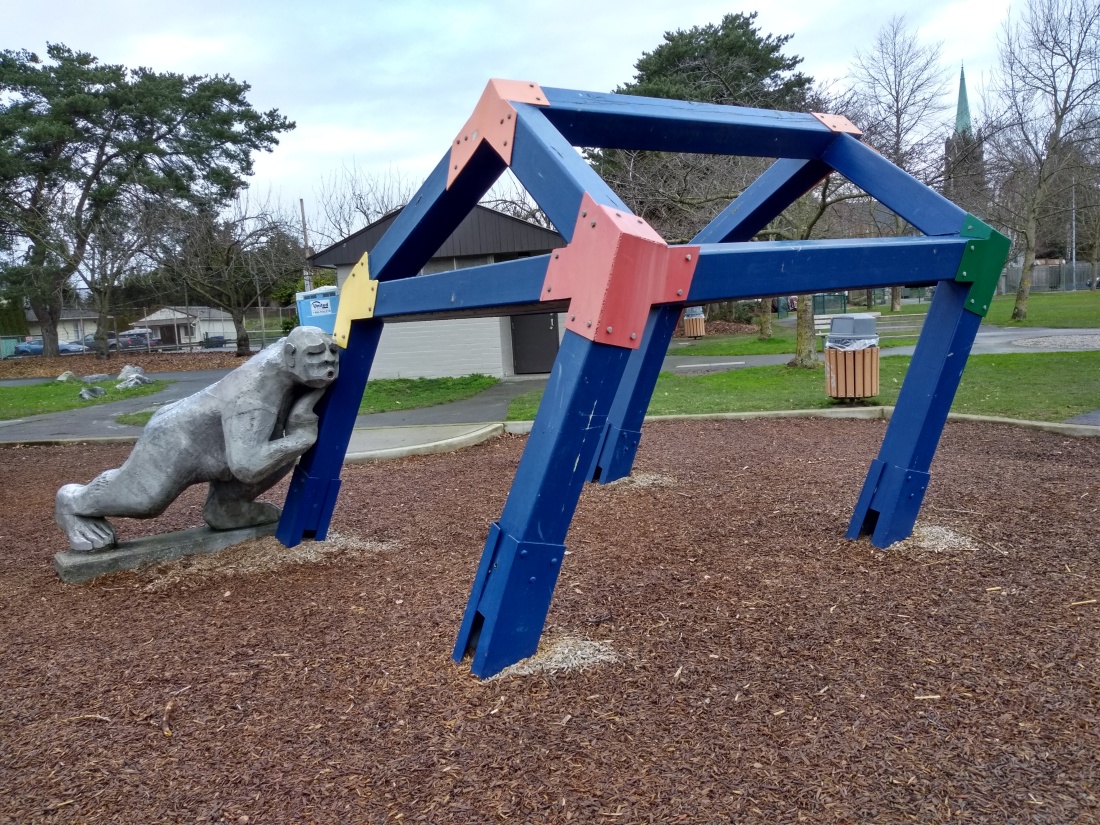 Six months ago, a crashing tree branch interrupted our Pacific Crest Trail hike. After choosing foot travel as a major form of transportation for many weeks, we entered the city of Seattle by ambulance.

Thus, our time of limbo began. Recovery in the hospital quickly led to more recovery time in an apartment near the hospital. As I healed, we progressed to visiting family in Oregon, returning regularly to Seattle to check in with the doctors.

That rogue tree branch had dealt quite a wallop. I felt as if I were in a state of suspended animation, waiting for the fractured occipital condyle and carotid artery pseudoaneurysm to heal in order for the surgeon to reassemble the eight pieces of my jaw.

While in Seattle, we explored our new home.

A ride on the ferry provided a porpoise eye view of the Seattle skyline.

The Fremont Troll, one of the better known denizens of the city, lurked beneath a bridge.

Who could resist playing next to the fountain at the Seattle Center?

One day we saw dancers getting filmed in front of a street mural. 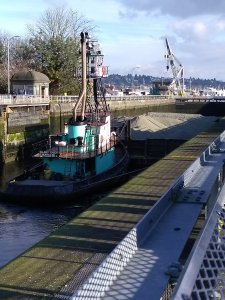 A tugboat pushed a barge full of gravel through the Ballard (Hiram M. Chittenden) Locks, much to our delight.

One charming result of limbo time included meeting old friends and hikers from our travels. I still giggle when I think of the dinner conversation we had with Specs, a 2017 Appalachian Trail thru-hiker, now living in Seattle.

We traded tales of experiences on the trail. Specs described the odd looks given by other hikers each evening when he pulled out his after-dinner wine, packaged in a juice box with a sippy straw!

“It’s wonderful how hiking a long trail makes one appreciate the finer things in life,” I exclaimed.

Specs burst out laughing. “Yes, the perspective gained on the Appalachian Trail is what makes one designate things like wine in juice boxes as ‘finer things’ of life!”

Each time I visited the neurosurgeon, he told me my body was healing admirably, and then he’d send me off to go heal some more. When the neck brace was removed in December, I celebrated! Maybe now, four months after the accident, I would get my jaw operation!

I could scarcely contain my joy to be rid of the neck brace!

The craniofacial surgeon had other ideas. “The broken pieces in your jaw bone have grown together. Yes, there is nerve damage, and yes, none of your teeth meet, but your body has been creating new bone. We could operate, but it would put your healing back a good bit.”

“But I can’t chew, with my teeth not meeting,” I told him.

“I think orthodontics might help,” he told me. “It’s been such a long time since the accident, it might be better to look at different answers.”

He sent me to an orthodontist who had much experience with trauma victims. She was sure she could give me chewing capabilities again, possibly without surgery at all!

My mouth was measured and x-rayed and photographed. Teeth molds were made. Our most recent visit brought the fascination of seeing a digital model of my skull, with the jaw healed crooked and none of the teeth meeting.

Jay put my thoughts into words. “One wouldn’t even know how to begin to get those teeth aligned properly.”

The nurse responded encouragingly, “That’s why we have Dr. Chen! She’ll be using all this to make a plan for your teeth.”

This uncertain period, awaiting decisions and action, is almost over. My braces should arrive the last week of February, and I’ll embark on the final phase of healing. The orthodontist estimates it will take two years to put my teeth in order.

In the meantime, we’ll enjoy a bit of winter in Seattle. And begin making plans for more adventures in the spring!

While still in the hospital, I asked the question uppermost in the mind of every injured hopeful thru-hiker.

“How soon can I start walking again?”

I was delighted with the physical therapist’s answer. “You can walk every day, at least 30 minutes a day. Don’t overdo it, get plenty of rest as well, but walking will help you.”

I also received advice on eating, another topic dear to a thru-hiker’s heart. The hospital dietician told me in order to promote the healing of so many broken bones, I should consume approximately 2,000 calories including at least 130 grams of protein each day. I devoured this many calories each day on the trail! It seemed incredible to me that laying around, healing broken bones, would require as much energy as hiking ten hours per day!

After leaving the hospital, I did find myself taking frequent naps and eating often. During the first few weeks of recuperation, my eyes refused to play nicely, each insisting that her view of the world was most important. My beleaguered brain would usually give up and show double vision. This, combined with shaky balance, created many spills in the kitchen. The great thing about wiping up a spill when one has doubled vision is that one only needs to wipe half of what is seen, and suddenly the whole spill is gone!

Walking became a major source of relaxation for my soul. Of course, walking in a neck brace could be a little tricky. It’s impossible to see ones feet. The ability to balance came and went for no apparent reason. Holding Jay’s hand solved my erratic balance. It also provided much needed support whenever my enthusiasm for exploring overcame the stamina of my healing body.

Our explorations were short at first. It took fifteen minutes to slowly and carefully creep to a fountain just a quarter of a mile away.

This fountain at Seattle University remains a favorite destination!

Often after enjoying the fountain, Jay and I would swing by a dog park. Sitting on a comfortable bench, we delighted in watching deliriously happy dogs run around and around!

We also discovered St. James Cathedral, home of a huge pipe organ dating from the early 1900s. I enjoyed the beauty of the cathedral, its thrilling organ music, and the time to listen for that still, small voice inside my soul.

As bones slowly knit and stamina increased, outings became more adventurous. One day we took the monorail to Seattle Center. 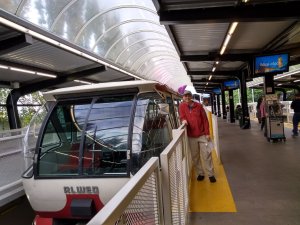 My very first time ever on a monorail!

Outside the Seattle Center, we discovered an interactive sculpture called Sonic Bloom, five “flowers” towering forty feet high. Motion sensors set off harmonic notes when each metal flower was approached. Jay and I immediately participated, reveling in the sequence of harmonies. With a few more friends, I’m sure we could have composed an impromptu tune!

We also discovered two paraboloidal dishes, set approximately 60 feet apart beside a busy and very noisy street. The instructions directed me to whisper into a designated focus point, and Jay would be able to hear it far away at the other paraboloidal dish. The paraboloid shape launched sound waves from the focus point and aimed them across incredibly noisy space to be collected at the other paraboloid. Jay’s disembodied voice emerged from the focus point, a clear whisper in my ear! I was amazed!

As the pain of my injuries faded and I became stronger, I did not think of myself as a convalescent. I felt I had improved greatly, striding down sidewalks holding Jay’s hand. However, Reality raised her head the day Jay and I were passed by a man in a wheelchair. Perhaps my vision of myself was a bit skewed by hope.