Two years ago I read a book which changed my life. Though I never aspired to become a runner, Born to Run, by Christopher McDougall, gave me a different way of walking which cured the extreme back pain I suffered due to a herniated disc. The book also led to many other changes in my life. (For more information on this, see Jay’s blog post, “What are we doing differently this time?” from our Appalachian Trail 2017 hike.)

The feet of a long distance hiker are constantly changing. They bear the weight of body and pack for countless steps, thousands of miles. One’s shoes must be flexible to adapt with one’s feet. When I began hiking the PCT, I wore Altra Timps, which fit my feet at the time. But after 650 miles, my feet cringed each morning as I shoved them into my shoes. Last year on the Appalachian Trail I wore New Balance MT10v4, all 2,200 miles. Unfortunately, New Balance discontinued that model. But with my feet rebelling over Altras, I decided to try a different New Balance minimal shoe, the MT10v1. It has no arch and very little padding, giving one’s feet a unique ground feel. Jay decided to try them, also.

“I prefer to think of them as modern day moccasins,” I laughed. “It’s the closest I’ll ever come to hiking barefoot!”

Our new shoes added a novel dimension to the trail. Hemlock and fir needles covered the path in a thin woven layer, like a yoga mat which blunts the outlines but lets one feel every dimple and bump in the ground. Small pine cones and hemlock cones gave a satisfying crispy crunch as we stepped upon them, reminding me of the sound of Rice Krispies. Twigs had a bouncy “crik-crack”, reminiscent of carrot sticks which had lain in my lunch bag for two days. Clumps of usnea, or beard lichen, felt like marshmallows squishing under my toes. And when we reached a snow bank, the crunch of ice crystals sliding and compacting beneath my feet made me think of teeth crushing peppermint pieces. Fun!

The path in Oregon is quite different from the trail tread in southern California. We had transitioned from dry sand and dirt to needle-carpeted ground. Due to the large amount of hikers on the southern portion of the PCT, it was usually easy to tell which way to go – one only had to follow the sandy path that had the most footprints. Here, we have hiked over 24 hours without seeing another person. There is one set of footprints ahead of us on this trail, which show up faintly sometimes when we cross a snow drift. This isolation has set me wondering about finding our way.

What happens when a tree covers the trail? What if we get so much snow we can’t see the path? Of course, we have GPS, but what if we need it for several miles and the battery gets drained? What are the markers here?

On the Appalachian Trail, there are white blazes painted along the whole 2,200 miles. “There are blazes here, also,” Jay reminded me. “They’re a bit older than painted rectangles. Look for axe marks in a specific pattern, much like the small letter ‘i’ on the tree trunks.”

“Oh, right!” I exclaimed. “I remember seeing those when I was a kid!” And naturally, as soon as I began looking, I saw many. 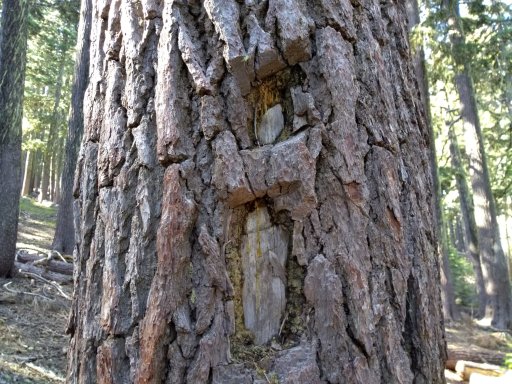 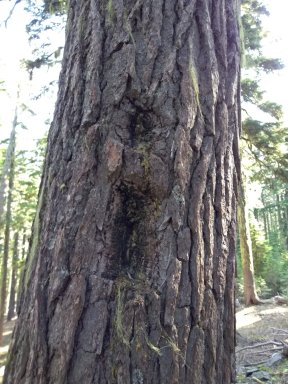 Sometimes, when the trail took a small curve, the blaze was marked to one side of the tree trunk. And occasionally we saw a double blaze, marking a complete change of direction, such as on a switchback. 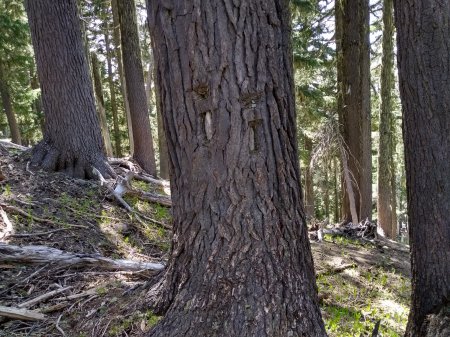 We began running into more snow drifts, especially whenever the trail switched to a north-facing slope and rose above 5,500 feet. I started to see the blazes as necessary, not just comforting.

Sometimes a cut log also signaled the presence of the trail. 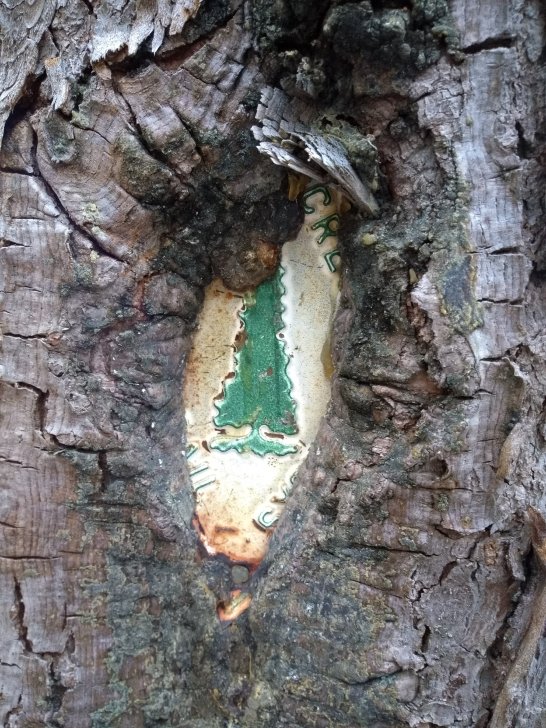 About once a day, a modern PCT marker would appear. 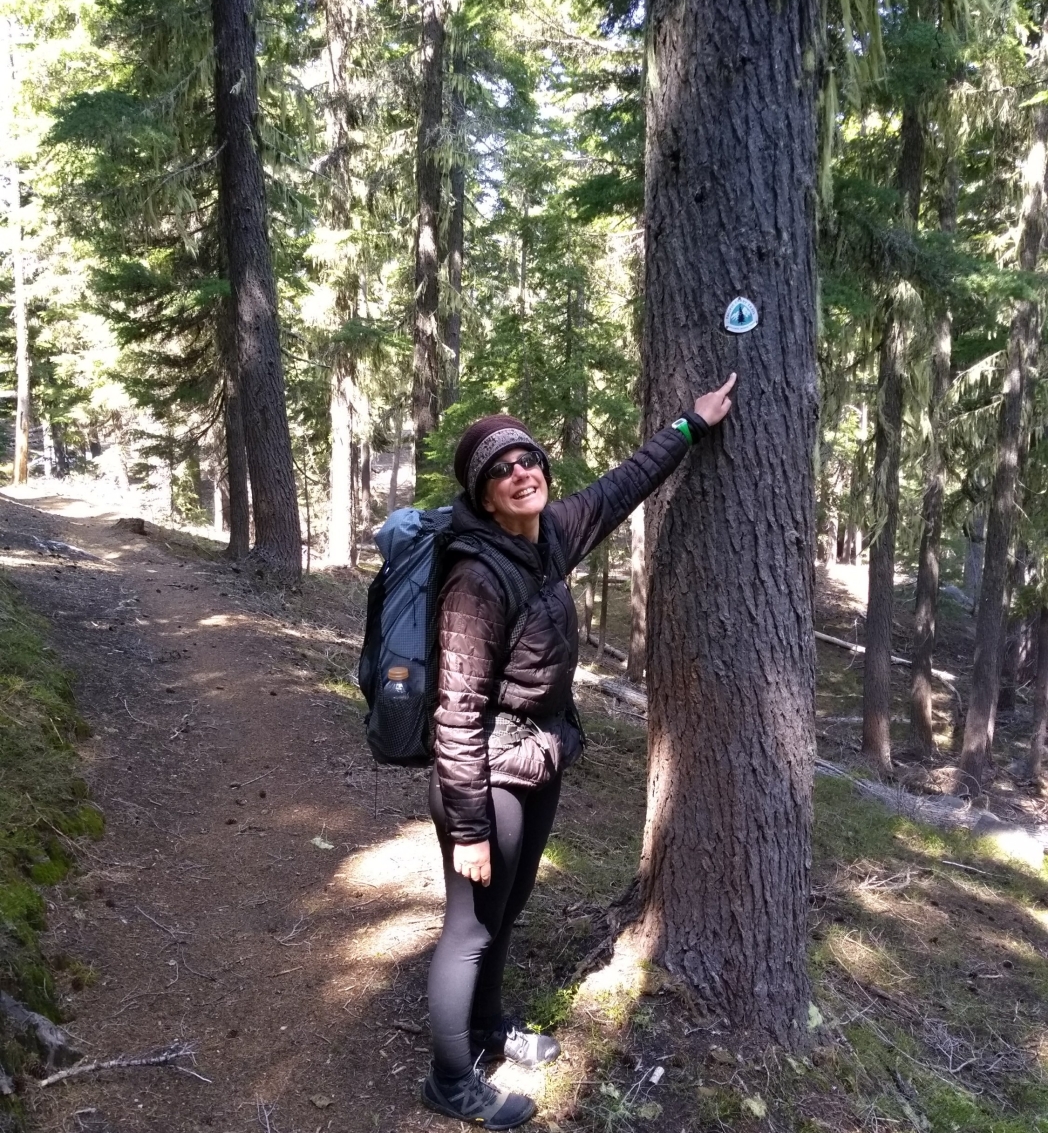 We continued to be charmed with nature, especially whenever the trail dropped below 5,500 feet. The Pacific wren sang, sounding as if he were having a party all by himself in the top of the tree. A red-breasted nuthatch called, “yank, yank”.  Every time we stopped for a meal, a gray jay came by to check us out. He would look around with an opportunistic eye, then fly off to wait until we were finished with our repast. At lunch near Desane Lake, we saw a hooded merganser fishing for his own midday meal. In the early morning and late afternoon, a Swainson’s thrush serenaded us with beautiful flute-like melodies echoing through the forest.

We hiked through an old burn area, dotted with stark trunks towering above optimistic new growth. 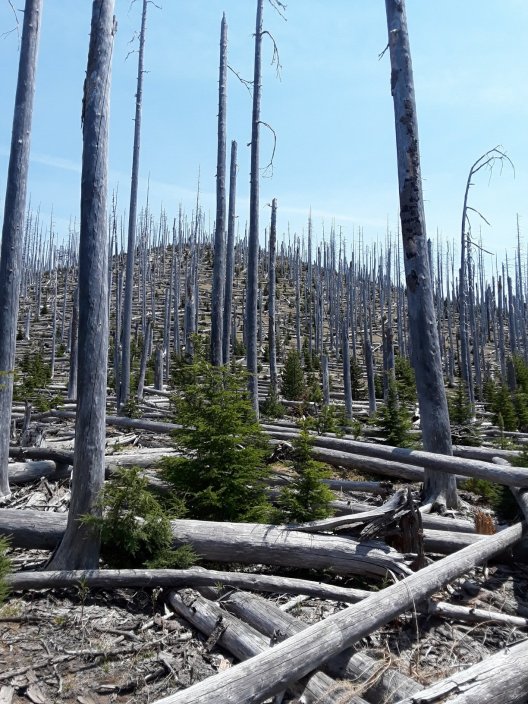 Usnea, or beard lichen, adorned many trees, waving gently in the breeze and giving notice of the excellent air quality in these mountains.

We also saw many examples of a striking orange and black fungus.

I close this post with flowers, the jewels of the forest.

There is no denying, the last two weeks of May saw us living in the lap of luxury. Double bed, hot running water, unlimited food within arm’s reach, dry shelter in the rain – all the trappings of civilization, which so many people take for granted. Our basic needs were being met with abundance!

On our last day in Eugene, we attended church with Jay’s parents. A massive pipe organ sent shock waves through my system, delighting me as the organist skillfully wove melodies and counter melodies. A visiting young men’s choir, singing glorious acapella harmonies, lifted me with transcending joy.

The afternoon saw us at King Estate Vineyard, indulging in a cheese and fruit plate along with lovely Pinot noir wine. I think this meal went a bit beyond just meeting one’s basic needs!

After satisfying our stomachs, a fascinating tour of the vineyard gave me food for thought as I satisfied curiosity about a new subject. 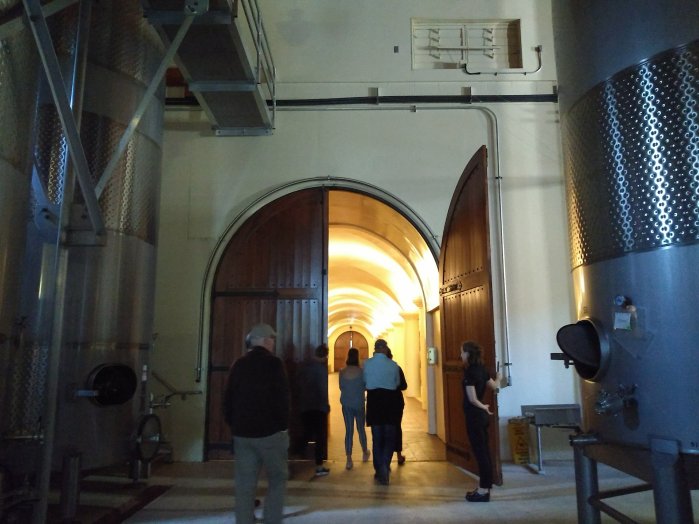 Family – sharing with each other, laughing and talking and telling stories, knowing we belonged together – this was the true highlight of yesterday.

And so today, we have returned to what some would consider a stark existence – the Pacific Crest Trail. Jay’s sister and brother-in-law dropped us off at Willamette Pass. Happy hugs were exchanged, and I blithely shouldered my pack, eager for more adventure!

Towering hemlocks muffled our footsteps as we entered the forest. Silence reigned as sunbeams lanced through deep shade, outlining a tree trunk here, spotlighting a wildflower there. A sense of dislocation permeated my being.

“It’s as if we’ve been snatched from Tatooine (Luke Skywalker’s desert home) and plumped down on Endor (forest home of the Ewoks in Star Wars),” Jay joked.

We hiked for three miles, enjoying our new habitat. A flower known as vanilla leaf posed next to a tree trunk, while pink trillium called good morning from beside the trail.

The rhythm of hiking began to lull me with familiarity, until suddenly I topped a rise to see … WATER! Astonishment coursed through my body. Even though my brain knew that lakes dominate much of the Cascades, actually seeing rippling blue water caused a disruption in my subconscious. The desert of southern California felt very far away.

By evening, my left Achilles tendon ached, and my pack had mysteriously gained weight throughout the day. As we lay out our dinner, I laughed over the contrast from yesterday. Our trail food could be classified as nourishing, but never sumptuous. The forest, with its quiet beauty, was so very different from the soul-thrilling music of Sunday morning. And yet, happiness pervaded my inmost being.

“Sometimes it seems that we humans need a return to the basics in order to be healthy,” Jay mused. “My brain wasn’t designed to stay at the top of Maslow’s hierarchy all the time. Maybe that’s why it’s a pyramid. We spend most of our time at the bottom – satisfying basic needs.”

I looked at Jay and smiled. Food, shelter, beauty, and a loved one. For what more could I ask? Maybe we hadn’t tumbled too far down Maslow’s hierarchy after all.