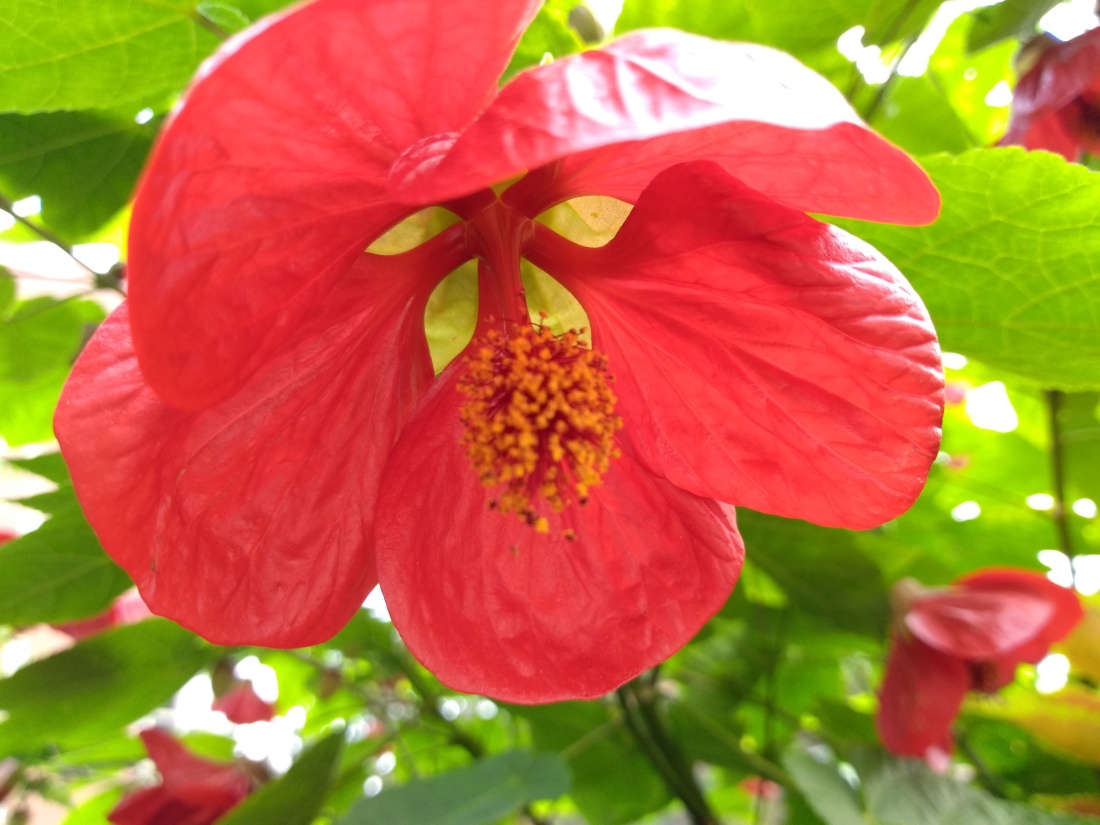 While still in the hospital, I asked the question uppermost in the mind of every injured hopeful thru-hiker.

“How soon can I start walking again?”

I was delighted with the physical therapist’s answer. “You can walk every day, at least 30 minutes a day. Don’t overdo it, get plenty of rest as well, but walking will help you.”

I also received advice on eating, another topic dear to a thru-hiker’s heart. The hospital dietician told me in order to promote the healing of so many broken bones, I should consume approximately 2,000 calories including at least 130 grams of protein each day. I devoured this many calories each day on the trail! It seemed incredible to me that laying around, healing broken bones, would require as much energy as hiking ten hours per day!

After leaving the hospital, I did find myself taking frequent naps and eating often. During the first few weeks of recuperation, my eyes refused to play nicely, each insisting that her view of the world was most important. My beleaguered brain would usually give up and show double vision. This, combined with shaky balance, created many spills in the kitchen. The great thing about wiping up a spill when one has doubled vision is that one only needs to wipe half of what is seen, and suddenly the whole spill is gone!

Walking became a major source of relaxation for my soul. Of course, walking in a neck brace could be a little tricky. It’s impossible to see ones feet. The ability to balance came and went for no apparent reason. Holding Jay’s hand solved my erratic balance. It also provided much needed support whenever my enthusiasm for exploring overcame the stamina of my healing body.

Our explorations were short at first. It took fifteen minutes to slowly and carefully creep to a fountain just a quarter of a mile away. 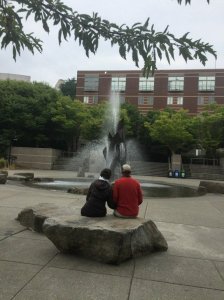 This fountain at Seattle University remains a favorite destination!

Often after enjoying the fountain, Jay and I would swing by a dog park. Sitting on a comfortable bench, we delighted in watching deliriously happy dogs run around and around!

We also discovered St. James Cathedral, home of a huge pipe organ dating from the early 1900s. I enjoyed the beauty of the cathedral, its thrilling organ music, and the time to listen for that still, small voice inside my soul.

As bones slowly knit and stamina increased, outings became more adventurous. One day we took the monorail to Seattle Center.

My very first time ever on a monorail!

Outside the Seattle Center, we discovered an interactive sculpture called Sonic Bloom, five “flowers” towering forty feet high. Motion sensors set off harmonic notes when each metal flower was approached. Jay and I immediately participated, reveling in the sequence of harmonies. With a few more friends, I’m sure we could have composed an impromptu tune!

We also discovered two paraboloidal dishes, set approximately 60 feet apart beside a busy and very noisy street. The instructions directed me to whisper into a designated focus point, and Jay would be able to hear it far away at the other paraboloidal dish. The paraboloid shape launched sound waves from the focus point and aimed them across incredibly noisy space to be collected at the other paraboloid. Jay’s disembodied voice emerged from the focus point, a clear whisper in my ear! I was amazed!

As the pain of my injuries faded and I became stronger, I did not think of myself as a convalescent. I felt I had improved greatly, striding down sidewalks holding Jay’s hand. However, Reality raised her head the day Jay and I were passed by a man in a wheelchair. Perhaps my vision of myself was a bit skewed by hope.