Mosquitoes reigned this morning, swarming us each time we stopped moving.

“They’re our own personal cheerleaders, urging us to greater feats of endurance,” Jay joked.

About a mile above Elk Lake we came to an old burn, and the mosquitoes left us as the breeze played among barren tree trunks.

“Let’s eat breakfast,” Jay proposed. “I know we’re planning to eat a meal at Elk Lake Resort, but I could easily eat twice.”

We happily ate our much delayed morning meal, then ambled downhill to Elk Lake Resort and ordered the mountain scramble – eggs, sausage, vegetables – yum! We also picked up a resupply box, the first one we have mailed on this hike.

Our final chore at the resort was to check the weather. Elk Lake employees helpfully looked up the forecast, and told us snow was predicted for Friday night through Sunday evening! Yikes! Jay and I looked at each other.

“Can we make it to McKenzie Pass by Friday evening?” I asked. “It’s about 30 miles.”

“I think we can do it,” Jay sounded confident. “We’ve got two days of beautiful weather. If there isn’t too much snow, the days are long enough now to make big miles if we push ourselves. Then we could hitch hike to the town of Sisters from McKenzie Pass and sit out the snow in a motel.”

From Elk Lake Resort, the PCT headed uphill for three miles, climbing 1,000 feet to the top of Koosah Mountain. I was delighted to find a clear trail the whole way, with captivating views of Mt. Bachelor, Broken Top, and South Sister. 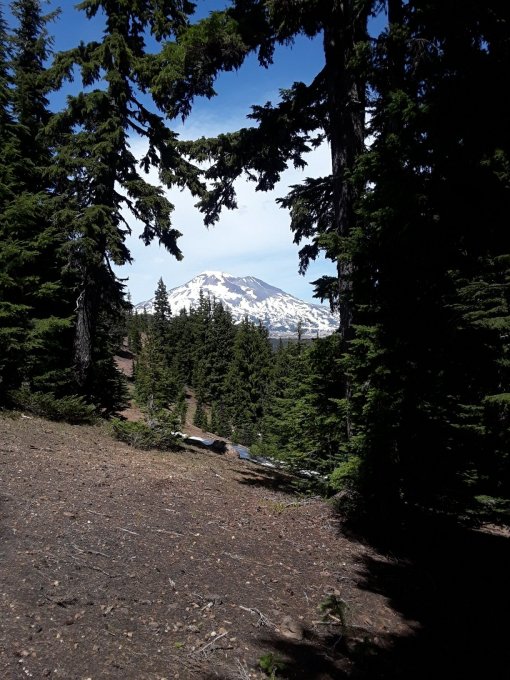 Okay, there was a little snow on top of Koosah Mountain, but I was sure it would disappear as we headed downhill. 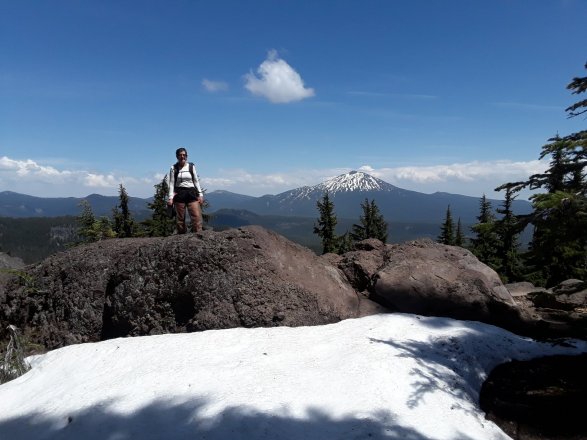 We were still enjoying views of the surrounding mountains on the downhill side of Koosah Mountain. However, I noticed more snow drifts appearing. Hmmm.

The more altitude we lost, the deeper the snow became. This was exactly opposite of what we had been experiencing for the last three days. I watched in disbelief as the snow morphed from patchy drifts to an unbroken blanket, four feet deep in places. Not a single footprint marred the surface, not even animal paw prints!

No matter how hard I tried, I couldn’t keep up with Jay. My feet slipped, slid, I tumbled sideways, and watched with discouragement as Jay got further and further ahead.

‘I can do this,’ I told myself. ‘There are blazes on trees, and I can follow Jay’s footprints.’

I kept walking, but suddenly realized that I had lost Jay’s footprints. I looked around – no blazes in sight. I looked behind me – only my own footprints. I heard a buzzing whistle ahead of me. ‘Jay must be using his pack whistle to call me,’ I thought. I forged onward. Then I heard the whistle behind me. I stopped, confused. Another whistle sounded to my right. What was going on?

“Jaaay!” I called in distress.

I took two steps, and there he was! What a relief! “I thought I heard your whistle.” I ran and hugged him.

“No, it’s the call of the varied thrush. These tall hemlocks are great habitat for them.” Jay sounded relaxed. “Do you need a rest?”

“You know I’ll wait for you. It’s important to go your own pace in this stuff. The last thing we want is for one of us to get hurt and lose our mobility,” Jay warned.

We kept hiking. When we reached Sisters Mirror Lake, I realized we had only gone 1.5 miles in two hours. My feet were soaking wet, and my emotions moved from discouragement to the smallest feelings of desperation. ‘I’ve just got to keep my concentration,’ I thought. ‘Keep my eyes on my feet, watch out for hidden traps. I can do this!’

Suddenly a hiker appeared, heading toward us! ‘Great! Maybe he has come all the way from McKenzie Pass! We can find out if this snow continues, and at least we’ll have tracks to follow now!’

The backpacker, Mike, stopped to chat, amazed at seeing other hikers. I was disappointed to learn that he had come from the Mirror Lakes Trail, which turned off the PCT in just another half mile. Mike had hiked this area a good bit, though, and he had several observations to make about our plans.

“The trail gets pretty flat ahead,” Jay told him. “I remember from 2012, hiking for about five miles across a huge meadow called Wickiup Plains. I wonder if the snow will be melted off that yet?”

“It’s hard to say,” Mike replied. “You’ve got approximately 17 miles of trail paralleling the Three Sisters. There’s going to be a lot of snow in that back country. Probably even more than here. South Sister has eight glaciers on it. And I’m not at all sure that McKenzie Pass is even open yet. You might have to hike another day to Santiam Pass before you can get to the town of Sisters.”

Wishing us good luck, Mike continued on. Jay and I kept walking, now following Mike’s footsteps. The snow was getting softer as the afternoon progressed, and I found myself falling through, “post holing”, often. When we reached the turn off for the Mirror Lakes Trailhead, Jay stopped.

“We need to think about this,” he sounded serious. “If the snow pack stays this deep and continuous, the bad weather is going to catch us.”

I was startled. I had been focused entirely upon each step, trying not to fall, trying to keep up with Jay, I hadn’t even considered the fact that we had other options besides our earlier chosen course. ‘This is one reason I love this guy,’ I thought. ‘He’s always thinking ahead, and he doesn’t let ego get in the way of practicality. It’s also why I never play chess with him.’

We discussed the options for several minutes. Jay was sure we would be okay as long as neither of us got hurt. But we knew from experience how quickly a slip and fall could happen. And it scared me to think of heading into more snow, with no people, no support system except ourselves. If we took the Mirror Lakes Trail, we would be able to follow Mike’s footsteps all the way to the road, and then hitchhike to the town of Bend. I hated to give up, but if McKenzie Pass really was still closed, that made the next road even further away.

“We’ve been handed an escape route on a silver platter,” Jay concluded. “It would be stupid not to take it.”

So we turned off the PCT, following what turned out to be a very popular trail. More footprints joined Mike’s, and I became confident that getting to town wouldn’t be too hard with this much evidence of humans around.

Gradually, as we descended in altitude and turned away from South Sister, the snow lessened. By the time we set up camp at the base of Kokostic Butte, there was a good bit of dry ground between the drifts. We went to sleep to the sound of frogs singing in a nearby pond.

Morning brought a few mosquitoes, a couple of bird songs, and only 1.5 miles to the road! Bright blue sky with warm sun made a mockery of the snowy forecast. This was June, the beginning of summer!

We reached the trailhead to find only Mike’s car in the parking lot. Undaunted, we applied sunscreen, and set out walking down the road. It was 29 miles to Bend, but we were sure we’d get a ride soon.

Three hours later, perhaps 200 cars had passed us. I was beginning to give up hope of a ride, and thinking we would have to walk the whole 29 miles, when suddenly, a small car stopped ahead of us, half-way off the road! I ran up to it, to find three young men in the car. “Do you need a ride?” the front passenger asked.

“Well, yes, but do you have room for both of us?” I asked doubtfully.

“Oh, sure, no problem! You can put your packs in the trunk.” The driver got out to rearrange their own day packs in the back of the car. We dutifully stowed ours, then squeezed into the back seat with the third young man. Oh, the luxury of riding!

“Thank you so very much!” I told them. “We thought we were going to have to walk the whole way!”

The three young men were from Corvallis, and had just climbed South Sister. They told us that they had seen way too much snow, but a beautiful view on top. These wonderful trail angels dropped us in downtown Bend, refusing our offer of gas money.

I looked at my phone, and saw a message from Jay’s parents. “Maybe we don’t need a hotel,” I told him. “Your parents want to come get us! Looks like we get to spend the weekend in Eugene! I guess we’ll have some time to figure out where to go next.”