At the top of the San Jacinto Mtns, a nine mile section of the PCT has been closed since a fire swept through in 2013. Fire is a very real presence in the forests of the arid West, and affects many sections of the PCT. This first closure for north-bound thru-hikers presents several choices for negotiating around the nine missing miles of trail.

Discussions began at the Paradise Cafe, one mile off the PCT on Hwy 74. Hikers congregated at this oasis, eating delicious hamburgers and tossing plans around. The fire closure sits high on top of the mountains, 17.5 miles from the cafe. Some hikers chose to skip the whole section, hitching a ride down Hwy 74 to the town of Idyllwild where they could access the PCT via several side trails. Other hikers decided to continue hiking the trail, heading towards the mountain ridges, getting closer to the actual PCT closure at the Spitler Peak Trail junction.

Jay and I had already discussed our hiking strategy for this trip. We liked the idea of leaving a continuous set of footprints whenever feasible. This particular PCT fire closure had several hiking alternatives, so our route continued up the PCT.

We hiked 12.6 miles today, first through Penrod Canyon with giant granite boulders, then we climbed steadily higher into the San Jacintos, walking through miles of drought tolerant shrubs and bushes. In the early evening, a side trail led us off the ridge line, down and around the mountain slope to a protected pocket of towering cedar trees fed by a crystal clear spring. The back country campsite of Cedar Springs was an oasis of comfort, and I happily fell asleep to the hooting of a very loud great horned owl!

We woke to a glorious sunrise with beams of light slanting between cedar trunks still harboring dawn’s shadows.

Five miles up the trail we came upon a group of hikers at the Fobes Ranch Trail junction. Some of the younger hikers were considering following the Fobes Ranch Trail downhill, reaching Hwy 74 in 5.5 miles, then hitch hiking to Idyllwild. They could possibly be taking a shower in comfort within four hours or less.

Jay and I continued on, heading uphill another two miles to the PCT fire closure at Spitler Peak Trail junction, leaving the hiker group still discussing strategy. Two older hikers also headed uphill, Buckwheat and Julia. About a mile later, the rest of the younger hikers passed us one by one, effectively dispelling any stereotype of younger hikers taking the easy way out!

Seven miles down hill from the Spitler Peak Trail junction lies Hurkey Creek Park and Campground, once again offering showers and a quick ride along Hwy 74 to Idyllwild.

Jay and I continued 3 more miles, finally camping near a small spring a short half mile after Spitler Peak Trail joined the Mountain Fire Alternative, a PCT route around the fire closure on the mountain two thousand feet above us.

Today is our town day, with just 4.5 miles to hike to reach Idyllwild, with showers, electricity, groceries, clean clothes, and restaurants. Hurray!

After a comfortable night, we headed back to the PCT, following the South Ridge Trail, one of several trails connecting Idyllwild to the PCT. We climbed over 4,300 feet today, most of the climb happening gently across a myriad of switchbacks.

Tahquitz Peak Fire Lookout gave a 360 degree view of the San Jacinto mountain range. With gray clouds covering the sky and a fiercely cold wind urging us on, we didn’t linger long! 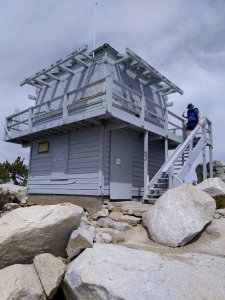 From the lookout, the trail switchbacked downhill another half mile until finally joining the PCT at the northern point of the Fire Mountain closure. We reached Strawberry Camp Tentsite just before sundown. A dozen other hikers, having used several different trails from Idyllwild to rejoin the PCT, shared the campsite. We met Buckwheat again, having last seen him on the Spitler Peak Trail. Circumventing the nine mile closure had taken us two days and 21 miles, and imposed nearly one vertical mile of elevation change.

4 thoughts on “Many Ways to Scale the San Jacintos”