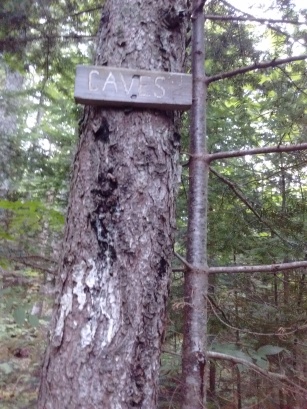 “Caves?” I turned hopefully to Jay.

“It’s not on our AT guide,” Jay looked thoughtful.  “Do you really have the energy to explore it now?  What if we come back tomorrow after breakfast.”

Jay was right.  We were just finishing a grueling 10 mile hike over the tops of three mountains.  Only minutes before I had been counting the steps between me and a horizontal position in our tent, soon to be set up at the nearby Piazza Rock Lean-to.

Our day began with a 700 foot ascent of Saddleback Junior Mountain, only considered a junior because it didn’t quite reach 4,000 feet altitude.  It’s slightly lower top kept us under the clouds, however, and gave us a great view of the surrounding countryside.

We then descended approximately 500 feet again, then climbed 600 feet to the top of Saddleback Mountain.  The view at the bottom of the ‘saddle’ was spectacular, with blobs of fog blowing across our faces, in turn obscuring, then revealing a world of green trees and sparkling lakes below us.  Up on the top of the mountain however, the cold wind blew fog mercilessly around us, shrinking our world to the next white blaze as we made our way across the wide bare granite summit.

Finally, the last four miles of our day included a 2,100 foot descent.  This, really, was the hardest part of the day, as we slid and scrambled down, down, down.  It seemed the shelter would never appear.

“Promise we can come back after breakfast?” I asked Jay.

“You bet,” he replied, and continued down the trail, headed for the tent sites by the shelter.

The next morning, most of the hikers at the shelter were talking of going to the town of Rangeley.  Everyone was anticipating showers, clean clothes, delicious hamburgers and milkshakes.  When asked if we were headed to town, I replied, “Yes, but first we have to go explore those caves.”

The other hikers looked at us in shock.  Some had not even seen the sign yesterday when coming toward the shelter.  Others had seen the sign, were slightly intrigued, but not enough to delay a trip to town.

“It’s only two miles from here to the road to Rangeley,” I explained.  “I may never get a chance to be here again.  How can I pass up caves?  The town will still be there later.”

Breakfast over, most of the hikers headed south, while Jay and I took a blue-blazed trail a short distance west.  A jumble of huge boulders extended through the trees, up the mountainside, as far as the eye could see.  Blue painted blazes led me over, under, around, and between giant tilted slabs of granite.  Dark passageways beckoned, small ledges offered finger and toe-holds to climb to the next level, patches of gravel became spots to catch ones breath in shadowy comfort.  One large ledge gave room for me to sit and dangle my feet in mid-air, looking at the entrance to this vertical cave some 20 feet below me.  I kept climbing, lured by blue blazes promising more cave above.  Finally, as leg muscles protested, I came out on a large level rock, looking through the top of the forest canopy.  I realized I had climbed several hundred feet.  “Hmm,” I thought.  “I just climbed and descended this mountain yesterday.  Maybe I better stop here.”  Blue blazes continued up the mountainside, but my brain was full of cavernous images, my imagination on fire with the possibilities for stories here.  What a wondrous place we live in, Planet Earth! 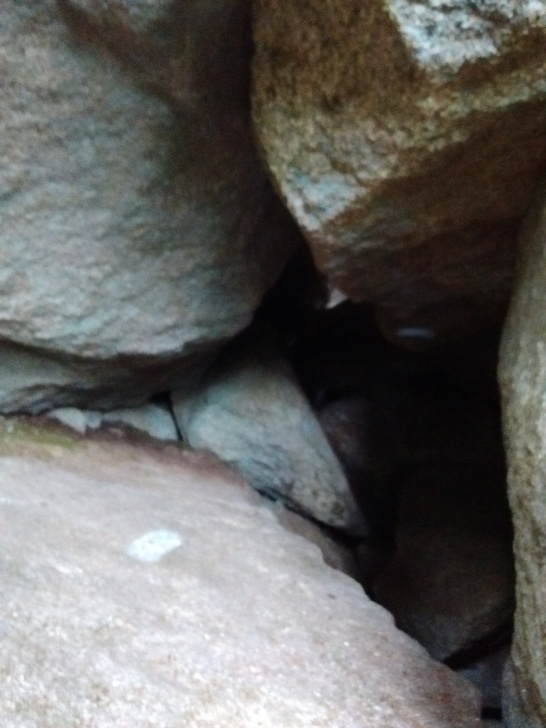 Fifteen minutes later I had rejoined Jay at the bottom of the caves, and we continued south on the AT, headed for town.  Five minute later, our progress was once again derailed when we came to another blue-blazed trail, this one leading to Piazza Rock.  We had wondered at the unusual name of the shelter, now was our chance to find out.  The trail headed steeply uphill for one tenth of a mile, over rocks and more rocks.  Suddenly we came to a clearing, and there high above us, was the predecessor of Pride Rock from the movie, The Lion King!  HUGE!  AIRBORNE!  AMAZING!  Words fail to describe, and pictures don’t show it all, but wow, what a sight!  The delights of town, wonderful as they are, just can’t compete with the wonders of nature. 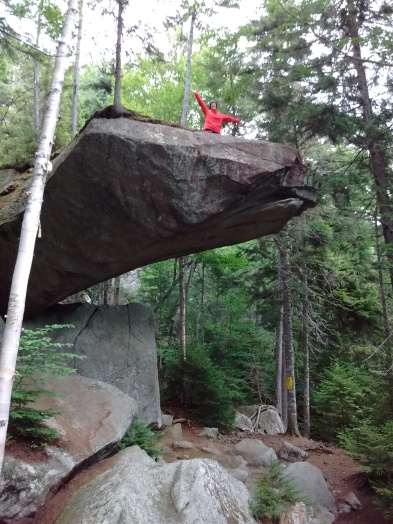 2 thoughts on “I May Only Walk This Way Once …”